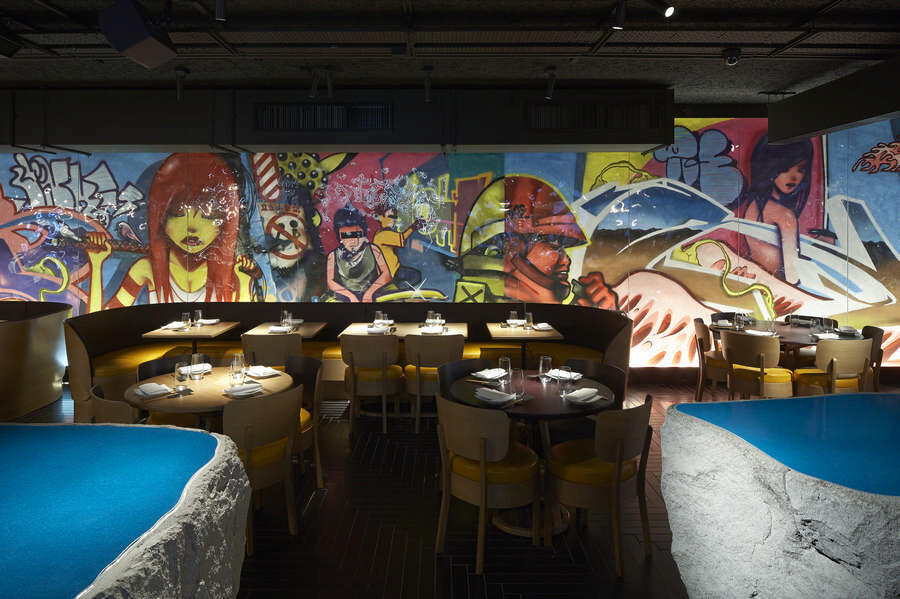 We bring you the best restaurants in Soho for 2015, including the finest Michelin-starred dining and cuisine

The fusion of Japanese and Peruvian cuisine goes a lot further back than one might think: over a hundred years ago, Japanese immigrants in Peru utilized their techniques with local Peruvian ingredients which led to the conception of 'Nikkei' cuisine, the secrets of which have been exhibited by the talented chefs at Chotto Matte. The team behind the Soho restaurant is foolproof with Kurt Zdesar, the man who introduced London to Nobu, at the helm, Jordan Sclare previously of Aqua Kyoto and Nobu as executive Chef and Tetsuya Kato, ex-personal sushi chef to the Emperor of Japan. Within the vibrant, underground ambience, taste buds are taken on a sensory journey and, quite frankly, all the dishes are worth savouring. Luckily, the sharing menus cater to those wishing to sample the array of creative offerings that include the Nobu-esque black cod and the pork belly with yellow tomato salsa and Peruvian chilli.

This Berwick Street gem from the Salt Yard Group is a two-storey restaurant and bar designed with a 20th century aesthetic with, low-hanging lights, a tapas-style bar and the central charcoal-fired grill. Naturally and consequently, the menu is grill-centric as Chef Director Ben Tish and Head Chef Jacques Fourie have masterfully constructed dishes that incorporate Spanish and Italian influence and are cooked over charcoal. Having received consistently positive reviews, Ember yard does not cease to impress with its mouth-watering cuisine: tapas sharing plates include the signature Gloucester old spot pork belly cooked over Applewood and oak charcoal whilst the Charcuterie and Cheese options stand out as particularly notable in terms of quality.

Named after its star dish, Ceviche is a must-visit spot that serves Londoners sublime Peruvian food with a side of fun. The space is divided into two sections, the first is occupied by London's first Pisco bar, showcasing the underappreciated but very delicious grape brandy within some wonderfully unique cocktail infusions; the other section consists of the restaurant, where the menu offers 6 different citrusy ceviche dishes to choose from along with a delectable selection of Peruvian dishes that includes mackerel escabeche and a braised octopus and chorizo skewer. Great bites aside, the atmosphere is fun, lively and the epitome of Soho-cool.

Within the boutique Ham Yard Hotel one can find its wonderfully swanky bar and restaurant with aesthetically incongruus décor. The ever-changing menu highlights seasonal ingredients and fresh British produce; dishes such as the intricate slow cooked duck leg with pickled Yorkshire rhubarb, cavolo nero and kale are executed masterfully and, if the weather permits, can be enjoyed on the charming roof terrace. The bar, with its Aztec/tribal mural providing that signature Soho edge, sits parallel to the hotel's bowling alley (it has a cinema, too!) and serves up inventive cocktails such as the Chocolate Orange Prosecco.

From the group behind Shoreditch, High Road and Soho House, Dean Street Townhouse in the heart of Soho acts as both a 39-room hotel and an all-day dining space. Wrapped up in the nostalgia of its Georgian origins, the décor is classic and features red leather banquettes and dark wood which results in a warm, convivial ambience. With Head Chef Stephen Tonkin at the helm of the kitchen, the restaurant serves up locally-sourced British cuisine that changes weekly and highlights simple yet deliciously wholesome cooking. The long bar with long-hanging lamps is an undeniable hotspot and offers a comprehensive list of cocktails with fun names like 'Once Upon a Cosmo' and 'Lady Marmalade'.