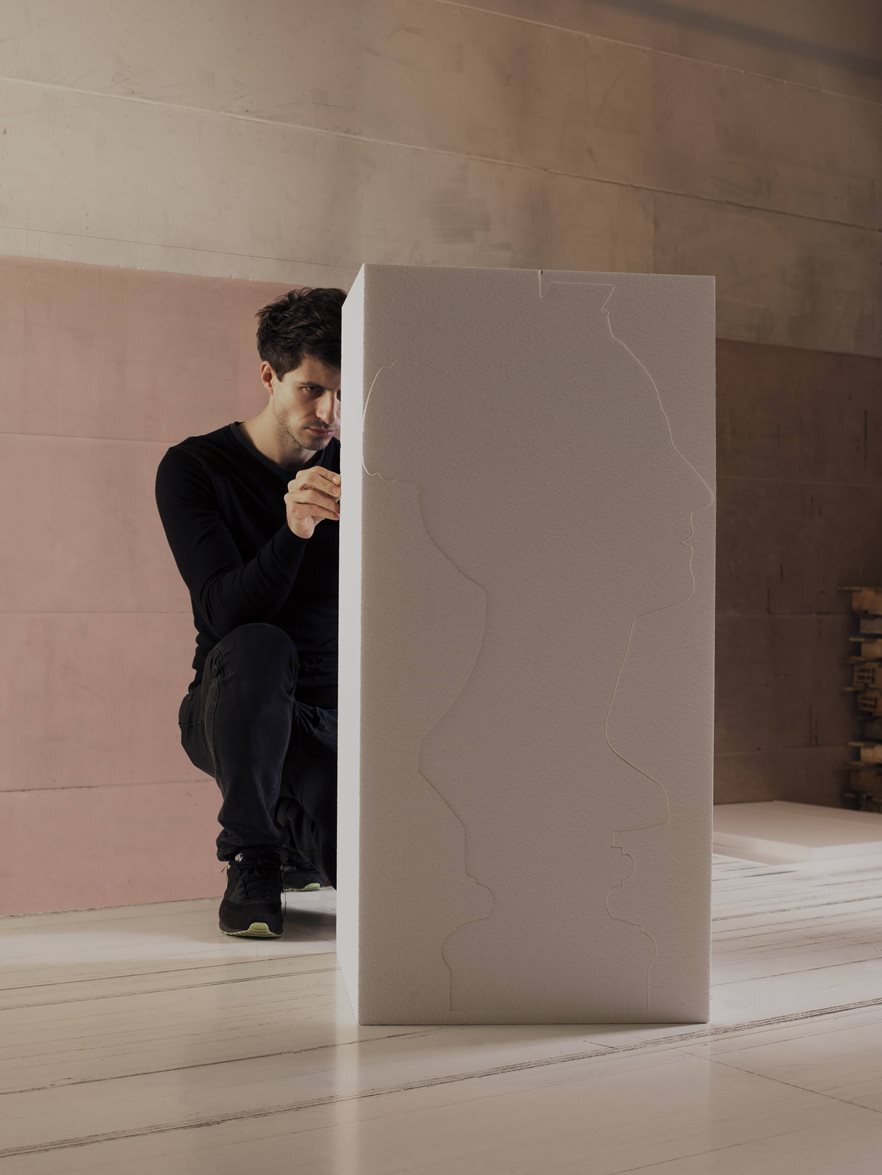 Quintessentially: Tell us a bit about your upbringing... I know you initially had an interest in Art History. What ultimately drew you toward becoming an artist?

Nick Hornby: I grew up in West London with my family in an old Victorian house. There were always people around; we had lodgers who were international students, and a cellist from the Royal College somehow lived in the garage. From a very young age, I was intrigued by modern sculpture: a monumental Jacob Epstein on the way to school - which I found ugly and horrendous, but incredibly captivating; and the Henry Moore outside Parliament that was huge and tactile. On top of this, at school I was criticised for having ideas back-to-front, for pursuing tangents, skipping steps, jumping to conclusions and breaking the rules - but eventually, I learnt that these problems were celebrated in the Arts. What was deemed problematic at school turned out to be the skills I’ve learned to develop and currently use as an artist.

Your pieces are such a unique marrying of old and new. How do technology and the digital space impact your work aside from the actual construction of your sculptures?

Yes - an artist’s challenge is to make work that reflects the present moment, is ‘ahead of the curve’ and will ‘stand the test of time.’ It’s a marriage of sorts but maybe also a false binary. I think it’s a comfort to know that sex and death have been around for ages - and that the new iPhone won’t be new for long.

I really embrace technology, but want people to ask ‘what does that mean’ rather than ‘wow, how did you do that?’ I want to avoid the distracting spectacle of new technology, so my approach is often to settle on an outcome that sits within an art tradition - for example, a sculpture cast in bronze, or carved in marble. That said, I’m entirely plugged in and online, tagging, syncing, WeChatting, scanning, and sharing. And things might change as I’m currently working on an augmented reality commission.

Your pieces often seem gravity-defying — is that intentional?

I definitely think of ‘gravity-defying’ as a useful dial one can turn; the virtuosity of transforming heavy stone into something seemingly light is a traditional preoccupation that sculpture has engaged with since classical times.

At a basic level, there is something very elegant about standing en pointe. But I’m also intrigued by gravity as a metaphor - a fundamental reminder of ‘the real world.’ I care about making things real, in the real world, where we have to abide by gravity, by circumstances, economic forces, context. It is also a fascinating equaliser - the cliché - a tonne of bricks balance a tonne of feathers.

You use a variety of materials in your work. What is your favourite to work with?

I don’t have a favourite, but I like the commitment and responsibility of bronze and marble - the debt to the past and its longevity. Every material has such different qualities and associations: Michelangelo’s David was carved in marble, as is my bathroom countertop. I’ve cast pieces in solid silver which is curious because the collector is obligated to polish it regularly as tarnishes... I love the idea of this breathing material that needs looking after.

I’m currently working on a very large public commission for Harlow Town, where I have stretched the outline of Michelangelo’s David to 36 feet tall, this is then laser cut in sheet steel and folded into an S-shape teetering upright (the S-shape is actually a single line from a Kandinsky drawing from 1925). The material marries the concept and method - the precision of the laser can duplicate the nuance of Michelangelo’s figure, and the subsequent manipulation is akin to the graphite line. The sheet metal is Corten - a specialist weather retardant steel which forms a stable and beautiful rust-like surface.

You are somewhat of a collector in your own right. What other artists are you into right now?

Each of my works is within itself a mini-collection of other artworks.... for example, one piece might be the intersection of a Hepworth, Brancusi, and Rodin. They beg the question, ‘where do ideas come from?’ And if my materials are other people’s artworks at one point, do these objects become something new?

At home, I have pieces by Henry Moore, Lynn Chadwick, Phyllida Barlow, Michael Landy, Pablo Bronstein, Katie Patterson, Laura Ford, and Nika Neelova. Phyllida’s piece is a large painted wooden chair – it’s fragile and awkward and takes up quite a lot of space in my flat.

The artists I’m into - a handful of renaissance artists, some Victorian, some twentieth-century and some contemporary. I’m mainly interested in observing which things don’t change (sex, death, rock-n-roll) and which things do (industrialisation, equal rights, the iPhone). Michelangelo carved David in 1504 – and it’s still sexy in 2019. Damien Hirst and Tracey Emin still deal with human frailty, and post-internet artists still care about colour and form.

Learn more about Quintessentially’s Art Patrons membership, or get in touch with your Lifestyle Manager for more information.