Fit for the Gods | A Collection Of Heavenly Experiences On Mykonos 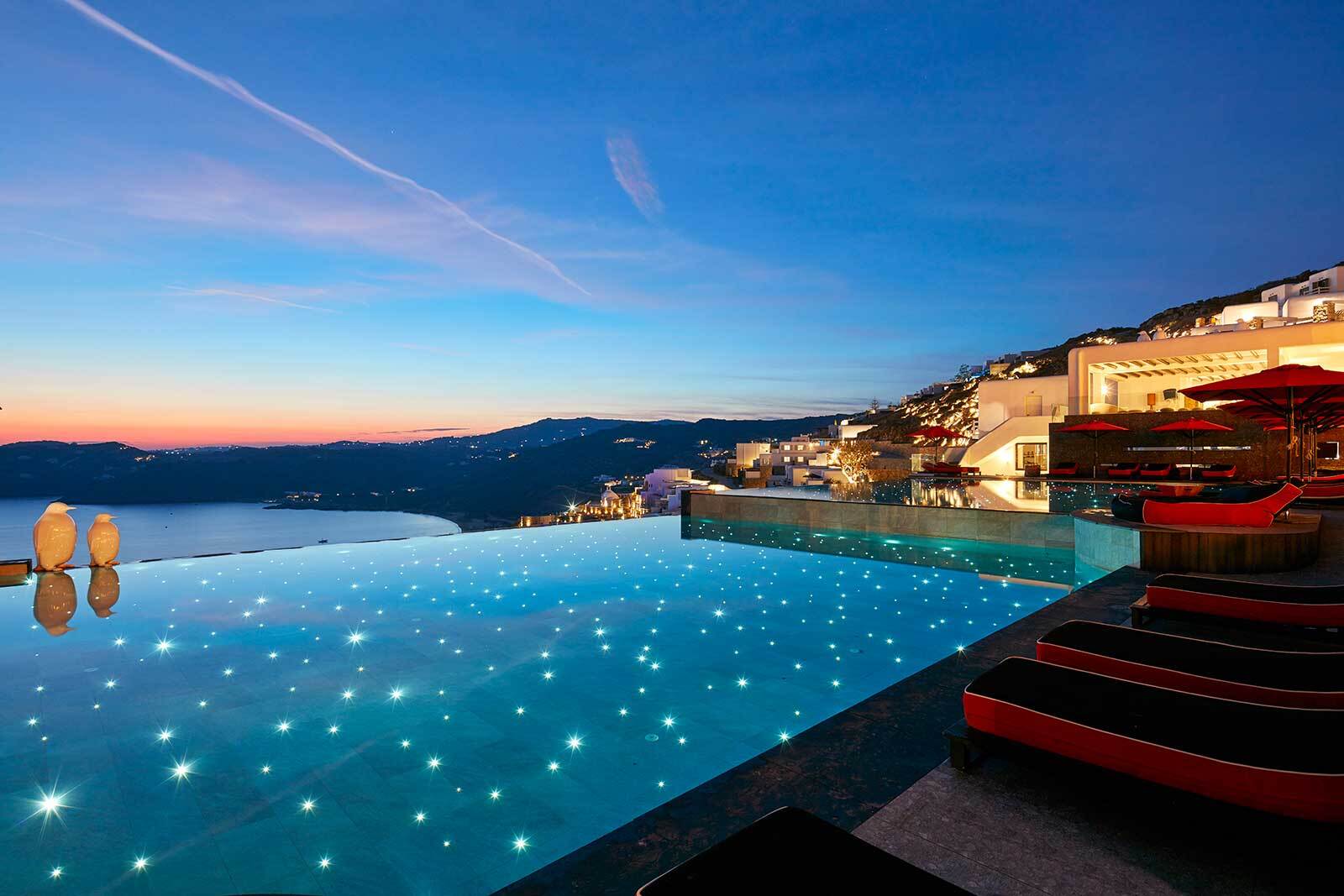 British novelist and travel writer Lawrence Durrell, best known for The Alexandria Quartet, spent the largest part of his life living in the sun-kissed lands of southern Europe and North Africa, drawing on their unbridled beauty to pen his literary works.

Having escaped the grey skies of England at the age of 23, he set up home with his mother and siblings (his younger brother Gerald grew up to be a celebrated conservationist) on the island of Corfu in 1935. When he finally got to visit the Cyclades Island of Mykonos in 1940, he observed: "However many tourists come with their chatter and their litter, little Mykonos will not let the stranger down."

Nearly 80 years later and one can't help but agree with Durrell. Because even today, and even in the peak of summer, when the cobblestoned streets of Chora, the main town, are teeming with day-trippers, little Mykonos won't disappoint. For Mykonos is many things. For starters it's the most famously cosmopolitan Greek island, revered for its whitewashed houses and crystal blue waters sparkling in the rose gold sunlight, and its narrow streets or 'kalderimia'. The place leaves an indelible impression on the mind's eye. Creative souls, adventurers, movie stars, social hermits and spiritual leaders come here to get away from everything and revel in a very cool kind of island chic. Mykonos is wild, authentic and breathtaking with its peerless, unspoiled beaches. It's all things to all men. Heck, it's even named after Apollo's grandson, Mykons, the god of beauty, music, truth and poetry.

But it was not just Durrell who waxed lyrical about Mykonos. The Swiss architect and modernist urban planner Le Corbusier arrived on the island in 1939, and he concluded that one could not call oneself an architect without having studied the houses on Mykonos. He famously said of the whitewashed cube-like houses with their cobalt blue shutters dotting the hills: "Whatever architecture had to say, it said it here". Since then, every glamour puss and artist worth their salt, from Jackie Onassis, to Brigitte Bardot, Elizabeth Taylor and Mick Jagger have found solace here.

Probably the most important thing that will seal your life-changing Mykonos experience is where you'll stay.

There's no doubt that Myconian Collection has claimed some of the island's most attractive settings. Founded in 1979 by George and Elefteria Daktylides, the hotels are run today by their four sons Panos, Markos, Vangelis and Marios. They're all Lausanne hotel school-trained and their training and filial approach are palpable throughout. The food is delectable as you'd expect, with plenty of succulent catch-of-the-day seafood. The service is warm, attentive and straight from the heart, and the atmosphere is classy and understated. Among Myconian Collection's pretty spectacular five-star portfolio, if pushed, we'd plump for two of its offerings that particularly pull at our heartstrings.

One is the rather grandly (but justly) titled Ambassador, a hotel that's not a hotel or resort, but that is a member of Relais & Châteaux. A magical home-from-home. Nestled unobtrusively into the slope and just a stone's throw from the fine white sands of Platis Gialos and its cafés, watersports and boat trips, the Ambassador is all clean lines and cool sophistication with lots of white marble, and Picasso-style flashes of colour on the walls. The high design flows effortlessly from one open room to the next, spilling out onto the spectacular pool deck, without once breaking the magnificent views of the Aegean Sea. In fact, the sea can be glimpsed from practically every vantage point.

What strikes you anywhere on Mykonos, and here especially, is the light. Bright morning walks run into brilliant poolside afternoons on the terrace, with a casual lunch and perhaps a cocktail from George's Bar thrown in for good measure. As evening advances and the light turns to twinkly dusk, there's something unspeakably romantic about enjoying aperitifs and a candle-lit dinner at Efisia, one the island's top tables, under a starry night sky. This is all a world away from the island's party pulse with its 'beau monde' and superyachts, or the small towns and their lively tavernas. Leave that to the trendy masses. But Ambassador can be your launch pad to explore the bustling little streets of Chora, the ancient ruins of Delos or the hidden coves of Rhenia, and beyond.

If all you fancy is staying close to home, (although we do recommend you explore the beauty of the island when you can), there's plenty on the spot to make you blissfully happy. From the attentive therapists at the state-of-the-art Ambassador Thalasso Spa and light-flooded gym, yoga and Pilates centre, to the discreet housekeepers, the impeccable waiters at the gourmet restaurants, the oh-so-knowledgeable concierge and the ever-present director - the staff feels like one big wonderful proxy family.

Then there's the five-star Villa Collection, a very special type of resort concept and our second choice of home on the island, if you want to really go it alone. Leaning into the hillside, the constellation of spacious private villas overlook Elia Bay from their terraces and 360-degree entertainment decks, which by the way, come complete with über-cool bar, epicurean restaurant and saltwater infinity pool. There's also round-the-clock personalised service should you wish for anything. Not that there's anything else to wish for here.


Quintessentially's Travel specialists have secured a series of exclusive benefits for Quintessentially Members to enjoy during their stay at Myconian Collection Ambassador, or Villa Collection. Be sure to contact the team to make the most of their insider knowledge and your exceptional benefits at: info@quintessentiallytravel.com or +44 (0) 207 022 6560

• Upgrade on arrival, subject to availability
• Continental Breakfast daily for two people for duration of the stay
• $100 USD equivalent Spa credit to be used during the stay (not combinable, not valid on room rate, no cash value if not redeemed in full)
• Complimentary round trip private airport transfers from Mykonos Airport or Port
• Complimentary Wi-Fi


Offers are valid for May, June, September and October stays, subject to hotel's availability.

• Upgrade on arrival, subject to availability
• Continental Breakfast daily for two people, for the duration of the stay
• $100 USD equivalent Food & Beverage credit to be used during the stay (not combinable, not valid on room rate, no cash value if not redeemed in full)
• Complimentary round trip private airport transfers from Mykonos Airport or Port
• Complimentary Wi-Fi


Offers are valid for May, June, September and October stays, subject to hotel's availability.