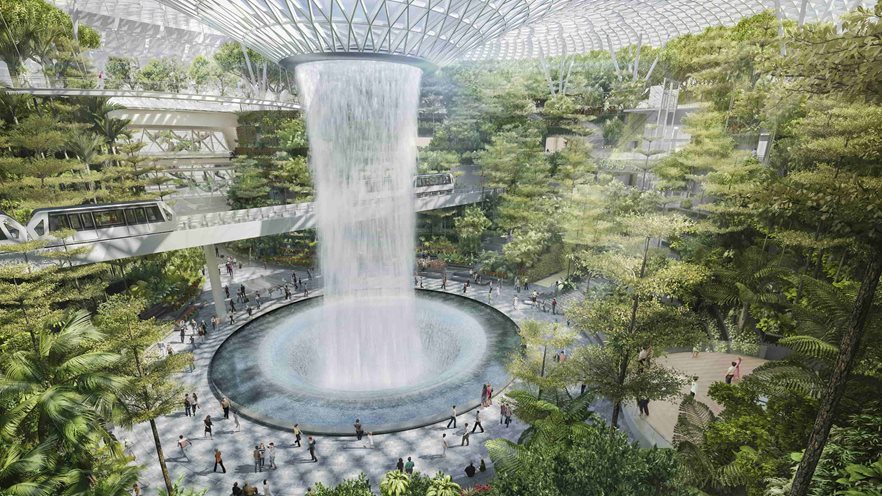 Usually, changing planes isn’t the highlight of your trip, but that could change, later this spring, when Jewel Changi Airport opens in Singapore. You may know Changi - the airport that this new facility forms a part of – already. This major East-Asian hub airport already offers transiting passengers the access to swimming pools, Jacuzzis, a cactus terrace, and a water-lily garden, and it has been voted the world’s best airport by Conde Nast Traveller, among other travel industry bodies. However, its current distractions will pale into insignificance once Jewel Changi welcomes weary long-haulers.

The new 134,000 square metre, £1bn development - built on the site of an old carpark - has been overseen by the Israeli-Canadian architect Moshe Safdie, better known for the nearby casino resort, Marina Bay Sands. Though it’s directly connected to the Terminal One Arrivals hall, it will look and feel more like a leisure destination, rather than somewhere you whisk your bags from one flight to another.

The central attraction in this, huge, glass-domed building is the Jewel’s Rain Vortex, the world’s tallest indoor waterfall. The 131-foot attraction can pour up to 10,000 gallons per minute, complementing the Forest Valley, an artificial rain forest, filled with around 100,000 shrubs and 2,500 trees, drawn from diverse territories, including Brazil, China, Malaysia and the US.

You can stroll in the forest canopies, via the Jewel’s transparent bridges, or go for a more adventurous hike, via a series of nets, some of which are set aside for walking, while others are made for bouncing.

There is also a series of slides, a maze and a “foggy bowls” section, fitted with misting apparatus, specifically designed to entertain younger travellers.

Adult travellers, meanwhile, will probably be more taken with the hub’s new restaurants – which include a Shake Shack, a Norwegian salmon restaurant Pink Fish, and popular Chinese offerings, such as Xiao Bin Lou. To add to this, a host of other diverting facilities, including a huge new Nike sportswear store, the first Pokémon Centre outside Japan, and a Jade Centre for HSBC’s private-banking clients.

Indeed, diversion is exactly what the creators Jewel Changi Airport are aiming for. When plans were announced back in 2013, Prime Minister Lee Hsien Loong argued that Jewel Changi Airport would enable the airport to retain its position as “the hub in Southeast Asia,” a title readily challenged by others in Malaysia, Thailand and elsewhere.

It’s too early to say whether Jewel Changi Airport will succeed in winning over travellers, yet it seems certain that plenty will have fun finding out.

To maximise your travel experiences and make the most of every stage of your journey in style, no matter where you go, don’t hesitate to contact our team of travel specialists.