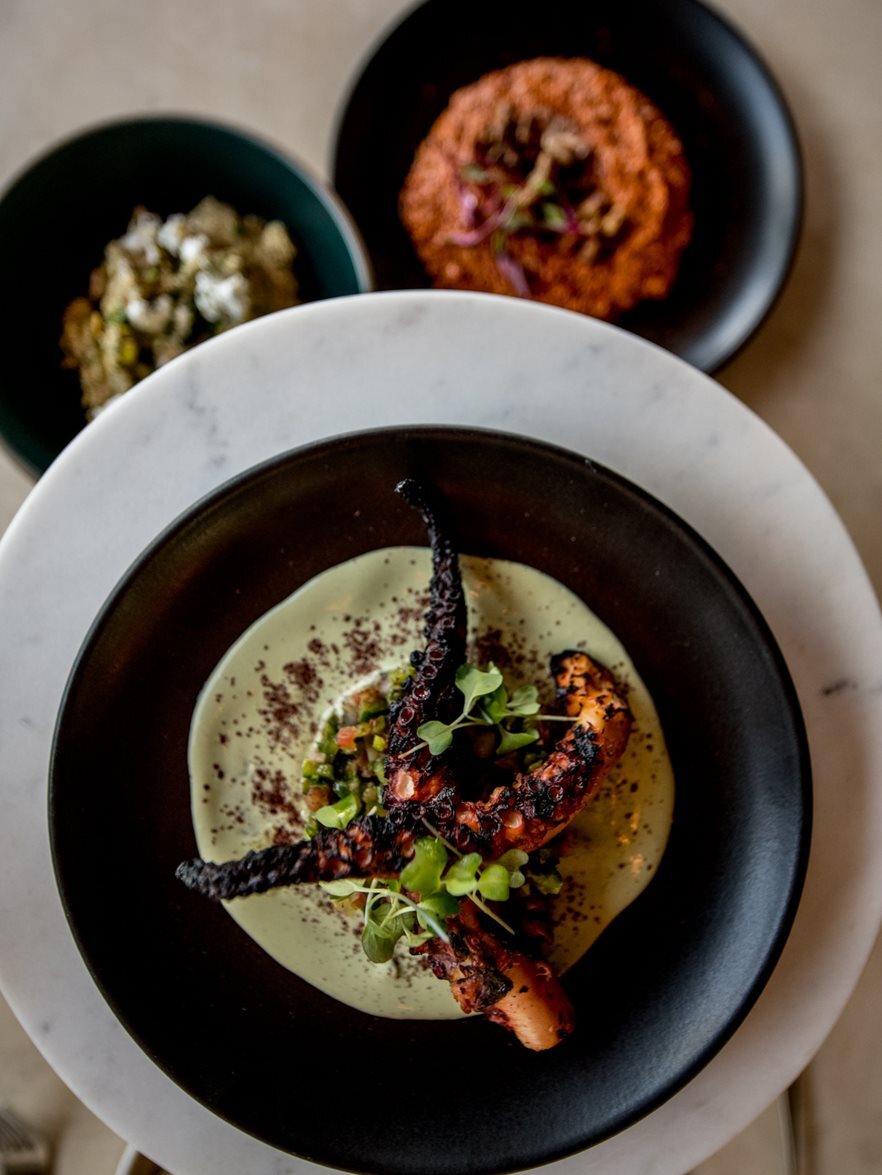 We speak to the Head Chef behind NYC waterfront restaurant, Celestine

Celestine is headed up by Executive Chef Garett McMahan who talks us through his love of spices; the art of sharing, and how he’s putting his own spin on traditional Middle Eastern fare.

Natasha Silva-Jelly: Talk me through the approach to your food and the vibe of the restaurant, which you describe as a casual twist on fine dining.

Garett McMahan: We are all about well-sourced, seasonal food that’s based around Mediterranean and Middle Eastern cuisine. I love drawing inspiration from lots of different spices, spice blends and ingredients from these two regions, and there are a lot of dishes traditional to these regions that feature on the menu. But I’ve given them a new twist, while ensuring they are still rooted within those styles of cuisines.

NSJ: The menu features a lot of mezze plates, so the food is designed to be shared.

Garett: Yes, that is the vibe. When you have a menu with a mezze section, whether you are a table of two or eight, everyone gets that sense of casual, family-style fine dining, which is very comforting. It’s great to break bread, pass it around and do something other than having a classic starter and main. Even in traditional fine dining, I feel like people want to share these days.

NSJ: What inspired you, a guy from Indiana to look to Mediterranean and Middle Eastern food for inspiration?

Garett: It was definitely a big wake-up call when I arrived in New York 20 years ago, compared to my culinary experience in northwest Indiana, which was much more hot dogs and fries. I got totally immersed in the food scene in New York.

NSJ: You started out at the renowned French restaurant Bouley, so food with more of a global influence seemed destined to be in your future.

Garett: Yes, and then when I was at Perilla - which is new American cuisine - we had this open palette to play with a little bit of everything, so we started to do vegetarian tasting menus and I got a lot of inspiration from Indian, Middle Eastern and Mediterranean cuisine. The amount of great vegetarian food those regions put out is unique, and very spice-driven. I started to make use of a lot of those dishes, but I’ve really pushed it here at Celestine, and put my own spin on things.

NSJ: Do you regularly travel to sample and seek inspiration from the traditional fare in different parts of the world?

Garett: My wife and I visited Morocco recently, and I found it to be a lot more liberal (than I had imagined) as a culture and within its cuisine. I would love to go to Greece too; I’d like to bounce around the islands and be like a sponge, soaking up the cuisine.

NSJ: The wine menu also features varietals from the very regions that inspire your food; is that to enhance the flavour?

Garett: When we developed the wine menu, we discovered there were all these great wines from rural nooks and crannies in these cultural regions, which were fun to dig into. There’re also a few dishes to which I add specific wines, while some of the ingredients indigenous to these regions are incorporated into our cocktails.

NSJ: Do you work off a seasonal menu?

Garett: We do four seasons but there’s also a lot of micro seasons. And sometimes, someone will come up with an idea for a new dish, so we’ll add it to the menu. There are a couple of dishes that change every three or four weeks, which is great because I've worked at a lot of places where the vibe is, "You can only change the menu quarterly, we don’t want to reprint the menus.”

NSJ: Do you have a favourite dish?

Garett: Right now, I really like the hake; it’s cooked down in tamarind and a lot of other aromatics and barley. The sauce is really interesting to me; it has chestnuts and parsnips, but I didn’t want any dairy in it, so I used almond milk to make it into a creamed-out sauce. I also like our American sirloin, which comes with salt-baked turnips, tanzia - a dried fruit compote from Morocco that spices things up - and lots of caramelised onions, to give the beef an onion-marmalade aspect.

NSJ: You’ve just added sides to the menu too…

Garett: Yes, I'm really into our side dishes. Because people like sharing, they’ll pick one main and share a few sides. We have a lentil side with a tangier spice mixture. Also, Napa cabbage that’s been lightly sautéed, with dried barberries, a little Persian lime dust on top, and an assyrtiko Greek white wine crème sauce. We do a grilled cauliflower with pine nuts, pomegranate and tahini, and our Brussels sprout dish marinated in white balsamic and a Hawaij spice mixture with Israeli couscous - that's a good one.

Garett: There will be turkey, you can't not have turkey. But there will be a lot of spices and spice mixtures that translate really well into the Thanksgiving dinner. And we’re not doing flatbread, we’re doing nice parker house rolls, so we're sticking with traditional stuff - with a twist of course.

NSJ: The fit-out of the restaurant is inspired by Lebanon in the 1980's - talk me through that.

Garett: Our design partners Matthew Maddy and Nico Arze first showed us this space, and we were mesmerised by the view. We agreed it was a remarkable location. We’re heading into our first winter season and even when it's really cold and windy out there, there’s a very warm and comforting feel here – it’s ‘homey’. I love the fact that there are a lot of plants, as opposed to just flowers. And the open kitchen is inviting, so guests can feel like they are in your home. Although for a chef that does have its pros and cons.

Garett: Exactly, not a bad view. The location, being on the water, the name - I think it really all jives well together.


Celestine, which has a 65-seat dining room, a 45-seat outdoor terrace and bar seating, is the latest venture from renowned New York restauranteurs Julian Brizzi, Noah Bernamoff and Joe Campanale (Rucola, Grand Army Bar and Fausto). The interiors are clean and cosy, and the expansive windows flood the restaurant with natural light, offering spectacular views of Manhattan and Brooklyn Bridge and New York’s iconic city skyline. For more information or to make a reservation, please contact your Lifestyle Manager.