Though the seeds of change had been sown as far back as the late 2000’s, Pigalle’s neighbourhood makeover was sealed in 2015, with two milestone hotel openings. Jacques Garcia, arguably the most celebrated Parisian interior architect of our times, spectacularly transformed a Belle Époque pleasure house into what is now the chic, five-star Maison Souquet hotel. Meanwhile, Romée de Goriainoff, Pierre-Charles Cros, and Olivier Bon, the trio behind the Experimental Cocktail Club (ECC), also unveiled their first hotel, Grand Pigalle. The neighbourhood was finally shedding its once-florid image and blossoming into one of the hottest nightlife destinations in Paris. Now it’s positively de rigueur among the cool Parisian bobo set (bourgeois bohemians).

“It’s an area which looks much like the Marais district did some ten years ago,” says Olivier Bon, co-founder of the Experimental Cocktail Club. Bon is well-placed to comment; his radar for all-things-cool has led him and his fellow co-founders to launch some 20 hipster bars and restaurants over the past ten years.

Here’s our pick of haute hotspots to ignite your passion for Pigalle. 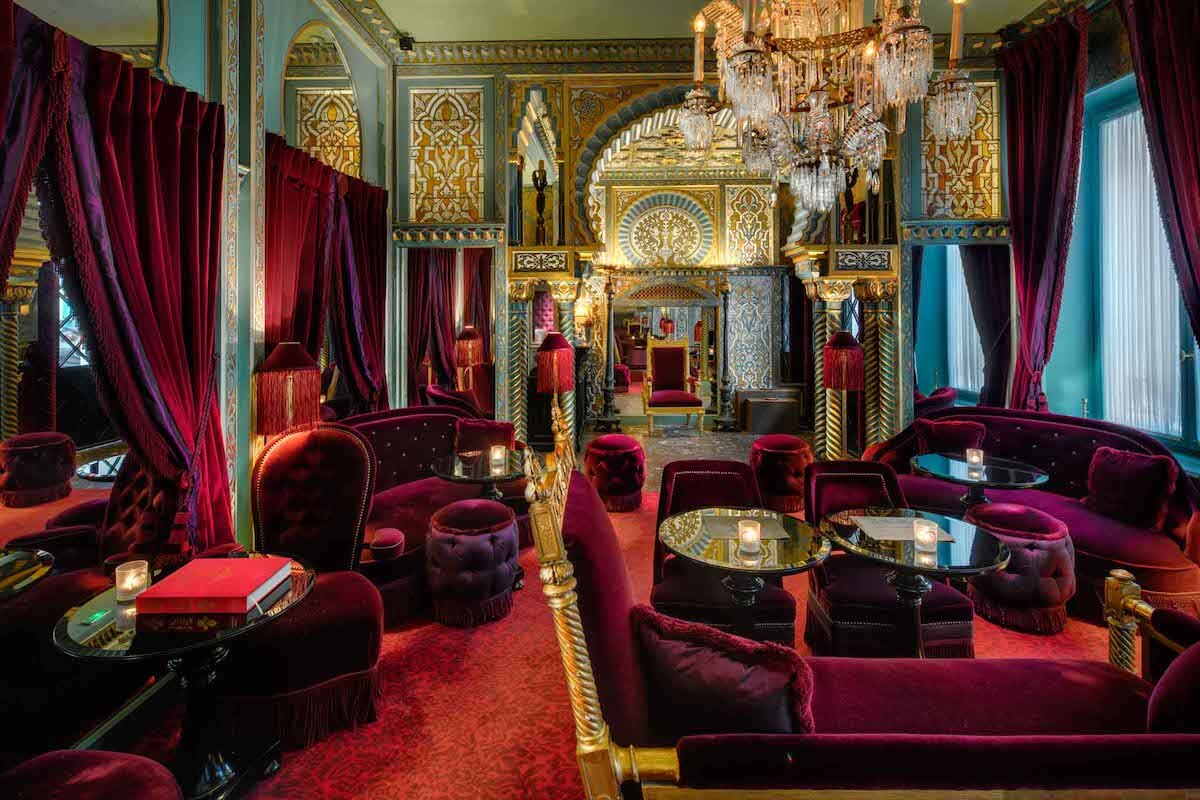 The first hint of Pigalle’s rapid-fire renaissance began almost a decade before the arrival of the sumptuous Maison Souquet and ECC’s Grand Pigalle. First to signal a change was the visionary hotelier Thierry Costes whose sexy designer hotel Amour set the tone in 2006 with its pink neon signage. There are just 24 rooms at Amour, one of which is an all-black cocoon with a mirrored ceiling adorned with disco balls – and they’re all strictly couples-only.

Neighbourhood hotel Le Pigalle, on the other hand, feels like a tasteful apartment with its contemporary artworks set against chic retro-influenced interiors, complete with a curated library of vinyl records. On the ground floor, you’ll find smart professional types tapping away at their laptops in an open-plan space, while enjoying canapés and sipping wine (including some rare organic labels) that are served until 2am.

Hôtel Bienvenue is distinguished by a palette of soothing pastel colours and Art-Deco inspired interiors, signed by Chloé Nègre. Its 32 light-filled rooms are split across two named buildings, separated by a central courtyard: ‘Town’ is urban chic, while its sibling ‘Countryside’ plays with lighter floral touches. As is typical of hotels in this area, you can dine late into the night on simple tapas-style dishes, and there’s a pretty breakfast patio.

Hôtel Parister delivers a serene and deeply glamorous take on contemporary French design. A rarity in Pigalle is the 18-metre pool with 24-hour access, plus a hammam and small gym offering six customised classes that include yoga and core training. We recommend you borrowing one of the house bicycles to get out and explore the city, if you have time. 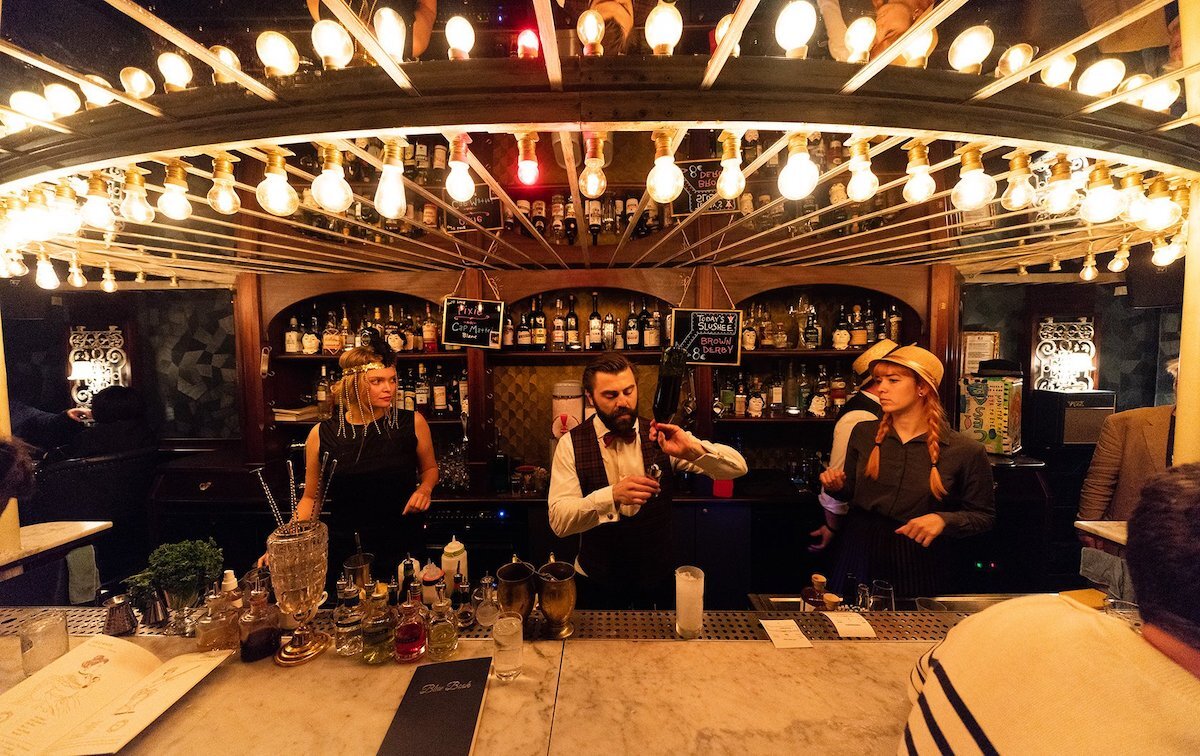 With bars lining the streets on either side, the Quartier Pigalle is heaven-sent for mixologists, including Mark Scott who designed the absinthe-focused cocktails at Lulu White. You’re in real night owl territory on the Rue Frochot, and this venue stays open until 4am on Fridays and Saturdays. It’s plush, upscale and Art Deco-inspired, with intimate booths and a vintage absinthe fountain on the bar.

At Dirty Dick, the south-sea retro ambience, bamboo bar stools and conch shells set the mood for a menu of zingy rum-based cocktails. Kitsch? Perhaps, but the breezy bartenders know their mixes, and this address ticks all the boxes for a night of unadulterated fun.

Things go beyond the cocktails at Glass – it’s the music that takes centre stage while the cool Parisian crowd dance well into the early hours. The bonus? You can line your stomach with a hot dog and pickles to keep your energy up. 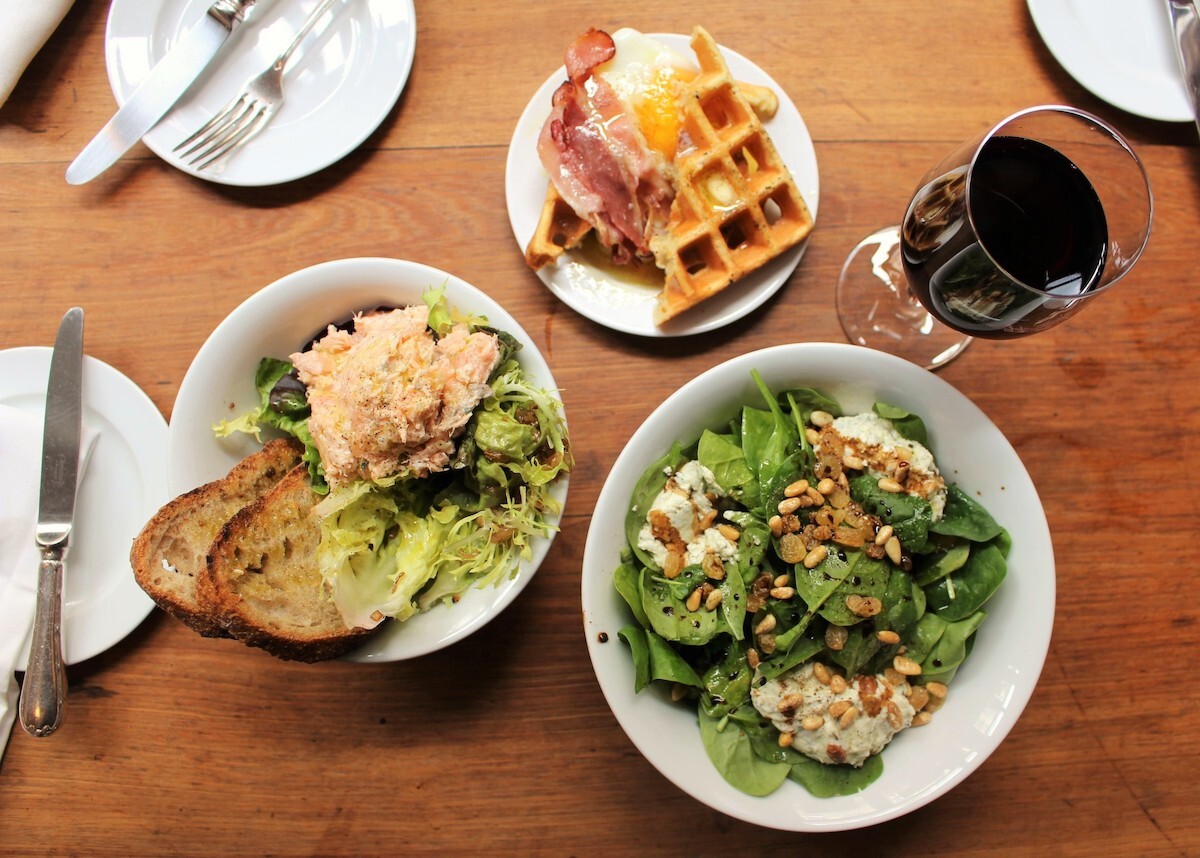 When hunger strikes, there are plenty of inexpensive menus and international flavours to choose from in Pigalle. Namely, Buvette, owned by Californian-born francophile Jody Williams (who recently opened a French bistro of the same name in New York). She brings us an all-day, vegetarian-friendly, self-proclaimed gastrothèque that’s been buzzing since day one. Great for people watching too.
28 Rue Henry Monnier, 75009

Elsewhere, you can opt for tiptop American burgers at Koff, bubble tea laced with pearls of tapioca at O’Bubble, or French-influenced Japanese tapas at Ito. 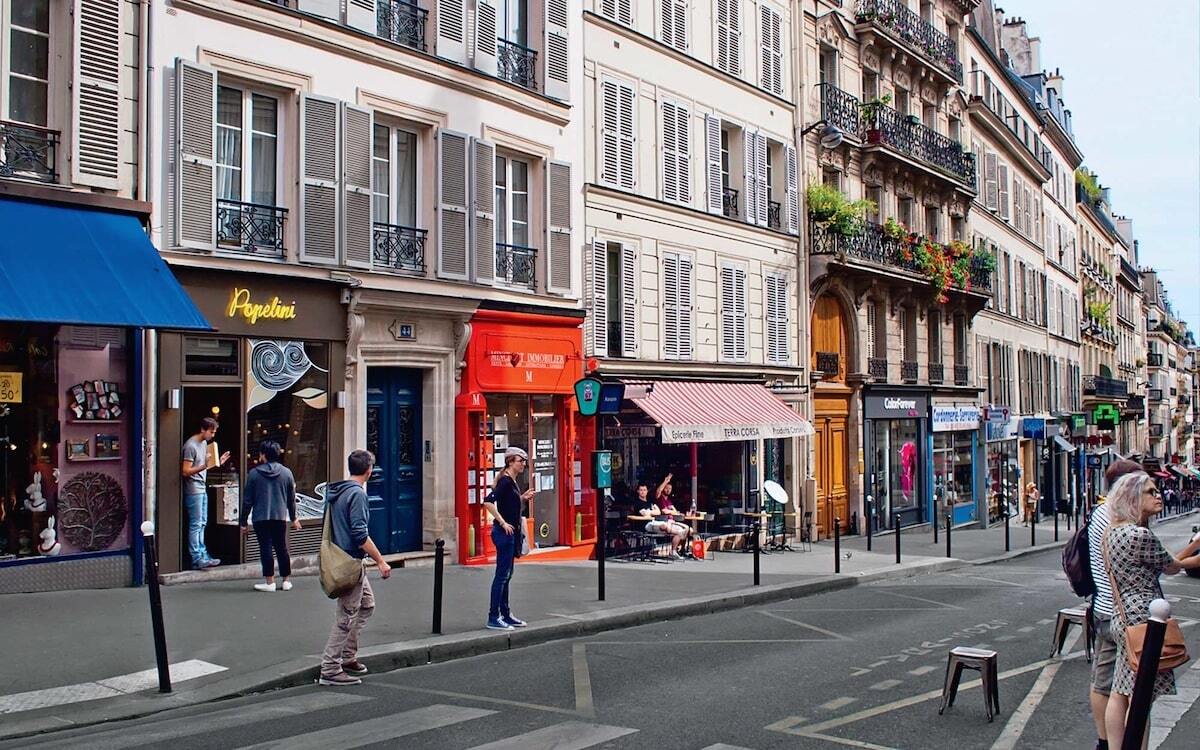 You’re spoiled for choice in Pigalle, especially when it comes to sounds, sport and sassy boutiques. Kanye West and Pharrell Williams raised the area’s international music profile when they chose to record at music producer Philippe Zdar’s Motorbass studios here. But, there’s a whole raft of long-established addresses to explore too, namely the guitar emporium Vintage Guitars, a haven for enthusiasts with a passion for rare collectables.
19 Rue de Douai, 75009

Equally as specialised is The Sound Factory, the destination of choice if you’re looking for the ultimate, high performance personal or home sound system, a state-of-the-art drumkit or synthesizer.
22 Rue Pierre Fontaine, 75009

Menswear is admirably served in Pigalle and there are two boutiques that are noted for their exquisite style accessories. Sauver le Monde des Hommes (which translates as “preserve or save the man’s world”) is a concept store for men, in the lower Montmartre sector, which stocks everything from grooming products and skincare, to gift ideas, books and urban fashion collections.
1 Rue des Trois Frères, 75018

Swing by the rather splendid A l’Idéale while you’re at it; its arresting men’s scarves in cashmere and silk, along with a broad range of accessories, including umbrellas, braces, cufflinks, handkerchiefs, books, letter openers and even golf bags, all make for excellent presents.
25-27 Rue de Martyrs, 75009

You can channel your inner skateboarder at Odilon, a skating mecca that caters to all abilities and ages. If basketball is your sport, get yourself to Rue Duperré where design group Ill-Studio and fashion brand Pigalle, supported by Nike, have revisited a basketball court - nudged between two townhouses – and refreshed its previously primary hues of red and blue, with eye-popping blocks of hot pink, azure blue and yellow. And yes, it’s opposite the Pigalle Basketball Store.

The crème de la crème of high fashion, namely Comme des Garçons, Isabel Marant, Vanessa Seward, Helmut Lang, and Spree’s own label are showcased under one roof too at Spree, a très chic multi-brand for women. If you prefer your style a little edgier, or you seek some Parisian homeware, L’Oeuf Paris is just the ticket. You’ll find everything from banquettes by Charlotte Perriand and minimalist lamps by Henri Bursztyn, to ultra-sharp streetwear from L’Oeuf’s own brand, including branded sweatshirts, caps and shoes.

Slicing through the heart of the neighbourhood is Rue des Martyrs, dotted with almost 300 speciality shops. There’s even a book dedicated to this incredible street, The Only Street in Paris: Life on the Rue des Martyrs, by former New York Times correspondent Elaine Sciolino. She calls it “a half-mile of magic”. She’s not wrong. 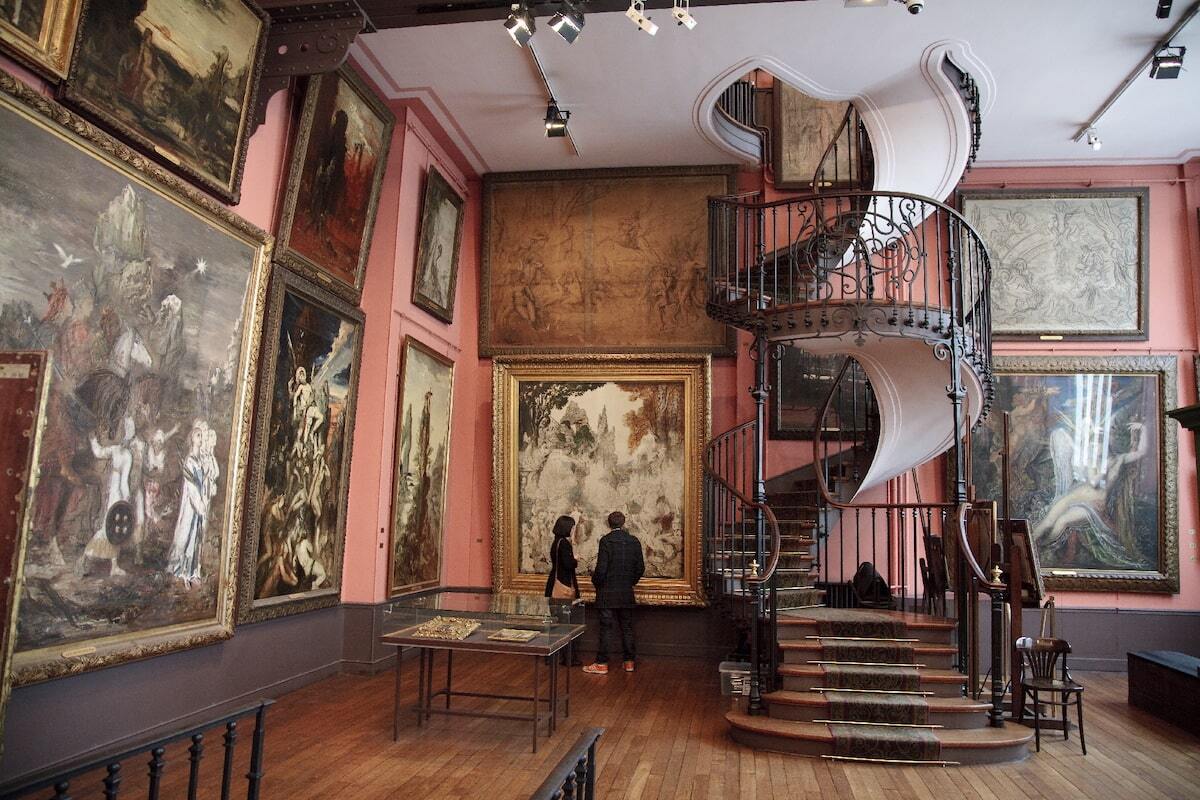 The Musée Gustave Moreau was once the Symbolist painter’s private home in the mid-19th century. Now this extraordinary art museum houses some 7,000 of his works, including sketches, watercolours, paintings and personal artefacts. It’s a rare chance to experience the intimacy of what was once an artist’s workplace and home, and it’s a breath of fresh air after the hectic vibe of the city’s larger museums. Be sure to stop for tea in the charming courtyard garden.


To plan a personalised itinerary around the Quartier Pigalle and Paris, please contact our specialists at Quintessentially Travel.

For further tips on shopping and cultural highlights in Paris, please contact your Lifestyle Manager.