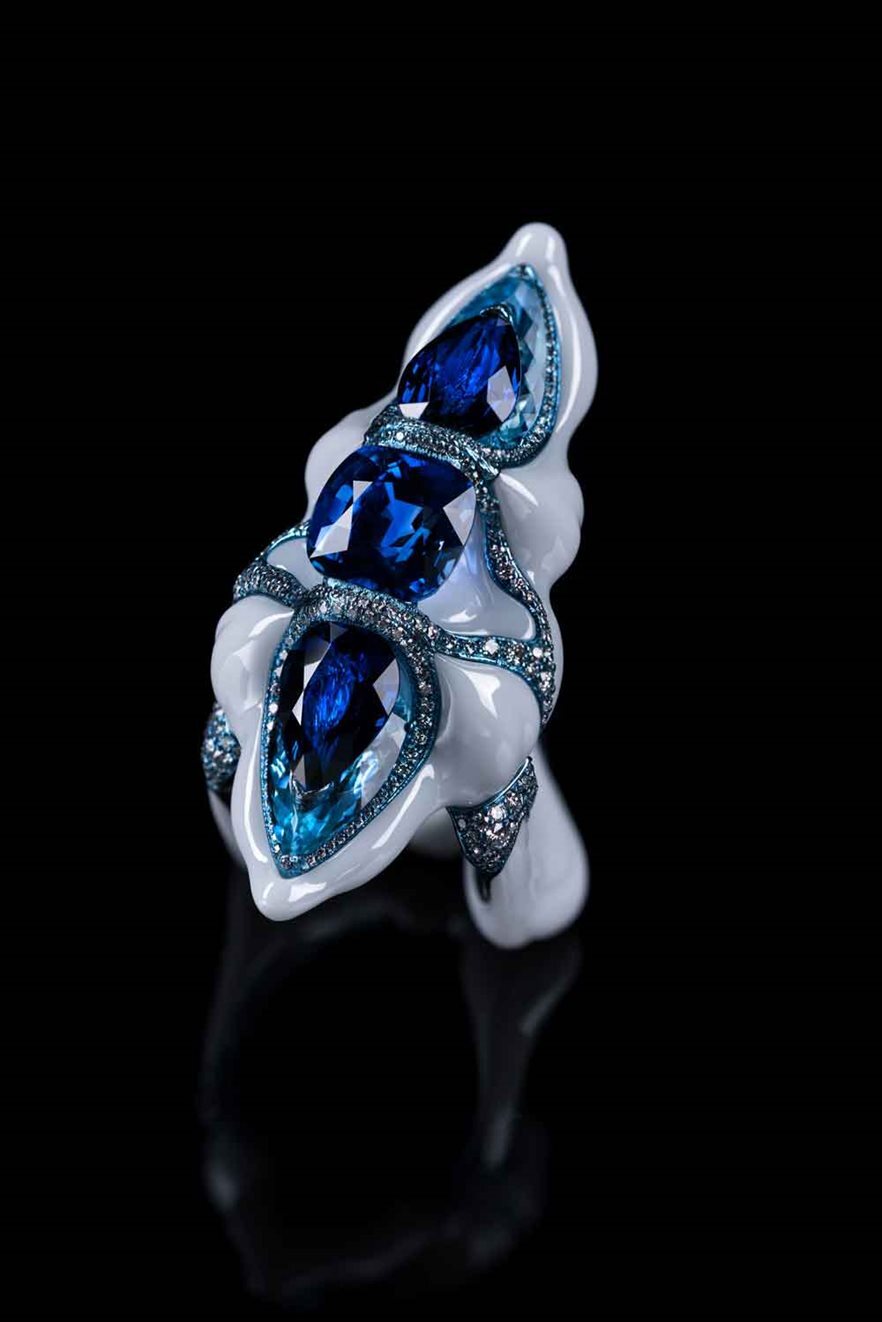 Wallace Chan's jewellery possesses a certain fairy-tale quality. The exquisite dragonflies, fish, butterflies, and other biomorphic creations in his work are so convincing, they look like they might lift from their owner's bodies, and flap or flutter away. The materials he favours – jewels, jade, titanium, and his own specially developed The Wallace Chan Porcelain, which is five times harder than ordinary plate steel – also set him apart. And this otherworldliness extends to 63-year-old Mr Chan who has, in his own way, made an extraordinary jump too, from his modest beginnings in China to the salesrooms of Western capitals.

"At five years old, I moved to Hong Kong with my parents, sister, and two brothers. We had nothing," explains the mainland- born master jewellery artist. "We moved into my grandmother's home and became a family of twelve people. There was simply not enough space. At night, I had to sleep in the bathroom. On the dining table, food was scarce." Poverty and language barriers – Chan spoke little Cantonese, Hong Kong's dominant dialect – meant a formal education was more or less out of the question, yet his innate curiosity led him to investigate the world on his terms. "I was always a curious person," he recalls. "Fascinated by the buildings in Hong Kong, I would ask my parents questions everywhere I went."

In 1973 he began carving pieces that were inspired by Chinese folklore, Greek mythology, Buddhist teachings, and more, eventually producing pieces that mimicked butterflies, in his own, inimitable style. "I do not pay attention to what others do or do not do," Chan says. This distinctive approach led the jewellery artist to develop his own tools and patent techniques. In 1987 he invented the best known of these — the hologram-like The Wallace Cut, which he describes as a form of three-dimensional internal carving combined with faceting. "It is an illusionary carving technique in that it lends the appearance of multiple carved figures when viewed from the front," he explains, "when in reality, it is only one carved figure in the back of the stone."

Chan says the equipment available to him during the mid-to-late eighties wasn't sophisticated enough, so he adapted a dental drill for his work, which he cooled with water. "I began carving in water and doing it stroke by stroke," he recalls. "After each carving stroke, I had to take the gemstone out of the water, check it, put it back, and carve again. The process was painstaking at first, and almost meditative at last. In the end, it felt as if my mind, my hands, and my tools were all moving as one. I disappeared, and only my consciousness was at work. It took me two and a half years to perfect The Wallace Cut."

The Wallace Cut became well known in Germany and Europe, then the US and China, and over the past three decades, his valuable, beautiful creations have been shown at Christie's auction house in Hong Kong, The European Fine Art Fair in both Maastricht and New York, and at the Biennale des Antiquaires in Paris, among other places. This autumn his show, Shapeshifter: The Multiverse of Wallace Chan, will be on display September 14 – 17 at the Asia House in London. The exhibition will feature 20 pieces from his new porcelain collection, as well as some large-scale, two-metre-high titanium sculptures, many of which are never before-seen. "Since 2007, I have been using titanium in almost all of my jewellery pieces, because of the material's lightness, hardness, flexibility, brilliant colours, and non-allergenicity," he says.

And, while his materials, tools, and prices might have advanced with his years, Chan still retains some of that early childlike inquisitiveness. "If we open our eyes, our mind, and our heart, we'll find that inspiration is everything and everywhere," he says. "Things can be so big and so small, and there is always a world within a world, and a universe within a universe. When you start doing that, you'll find the vastest creative universe even within the smallest being."

To attend an exclusive breakfast, talk and jewellery handling session with Wallace Chan on the 17th of September, please contact our Art specialists.