Foxglove & Mrs. Pound: Meeting the Creators of the Coolest Speakeasies in Town 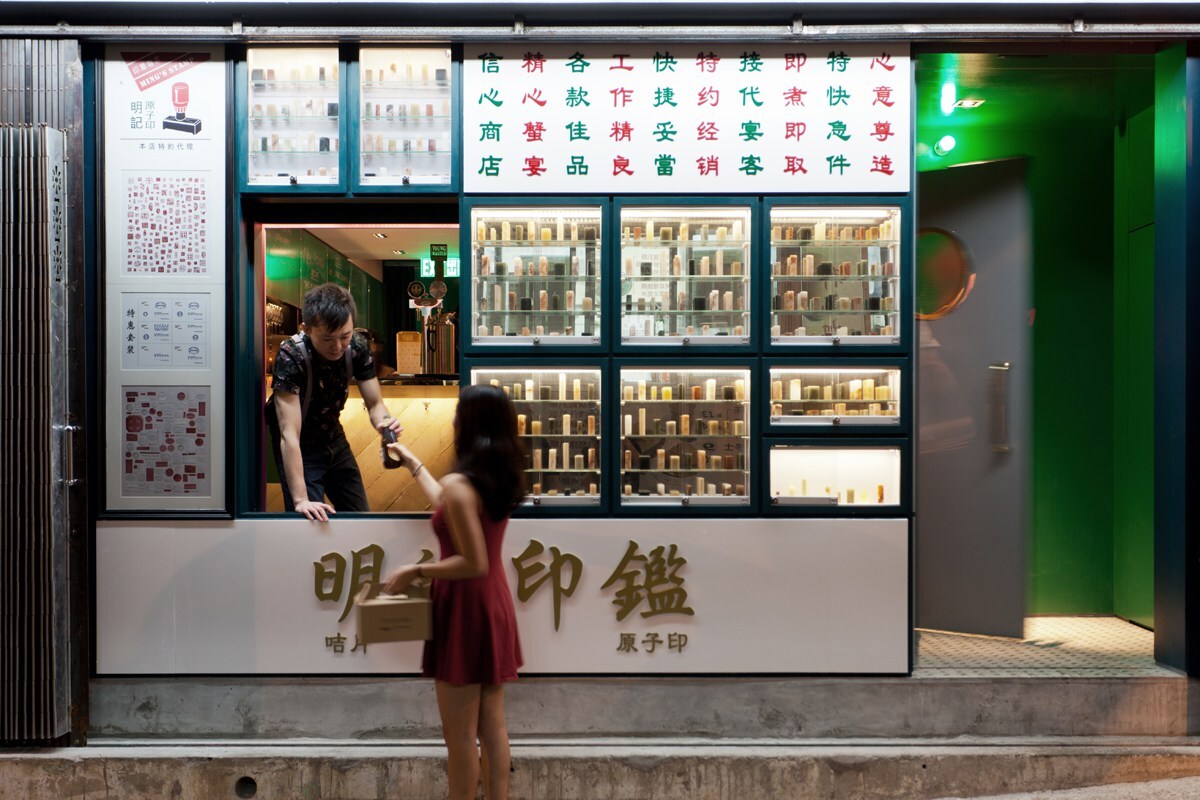 Ultra-cool and super suave; these are the kind of words you would expect to hear when people talk about two of the hippest speakeasies in Hong Kong. In a city where new restaurants open almost every week, Mrs. Pound and Foxglove continue to be the talk of the town. These two venues have truly made their mark by offering something very unique. Before you step within the premises, guests already embark on an exciting adventure to discover what could be hidden within. Foxglove is disguised as a fancy shop with an impressive array of umbrellas in Central and Mrs. Pound an old stamp shop in Sheung Wan, they blend in well with their neighboring shops. The real fun begins when try to find the entrance. For those who have not experienced it yet, we won't spoil the fun!

The concept behind Hong Kong's two most popular speakeasies is the work of three innovative minds; Jonathan Bui, his friend Shakib Pasha and his cousin Eric Lam. Whilst other major restaurant groups in Hong Kong are all striving for the best location in Hong Kong with sweeping views of Victoria Harbour against the world famous city skyline, owners of Foxglove and Mrs. Pound went for the underground cool. This project all began as a result of their desire to "create something hidden, because we find that in Hong Kong, people are always so curious about these types of places where they want to discover new things. So that's how we came up with Mrs. Pound," says Jonathan Bui, co-owner and managing director of Foxglove and Mrs. Pound. He gives Quintessentially some inside information on his background and how he and his team began their journey as restauranteurs of these two incredibly exciting speakeasies.

How did you discover your passion for becoming a restauranteur?
I worked in catering in Toronto as a side job whilst I was studying in university and I fell in love with it because the people there were so cool and I discovered that I really enjoyed the servicing industry. I then went to Shanghai to explore the Chinese market where I worked for different F&B companies managing their restaurants. I got to see a lot more of the structure of restaurant groups, what the market was like and how to manage and deliver good service. My parents have been in the F&B business for over twenty years and I came back to help out at the more traditional Chinese restaurants, all the while, I had that itch to start something of my own.

Do you have a favourite between Mrs. Pound and Foxglove?
I can't say that I have a favourite but Mrs. Pound is our baby. I honestly think it's a miracle, all hidden and tucked away in the heart of a hipster town. That venue has been around for some time and wasn't originally a stamp shop, it was selling dry seafood. A lot people think, 'poor guy we kicked out the person who use to own this stamp shop and created a restaurant' but actually, we just saw the space and we thought it would be really great to do something quirky, whimsical, fun and colourful? So that's what we did. Currently, I manage Foxglove and my partner Shakib manages Mrs. Pound. Everything is still done by all of us but each place has one voice and one direction.

Were you inspired by anything in particular when you started Mrs. Pound?
We were always intrigued by speakeasies. However, for us we wanted to do something much more playful and fun. We hope that people enjoy our concepts, the food, the ambience and the service so we wanted to bring something innovative and exciting to Hong Kong for the playful and adventurous crowd here.

What is the story behind Mrs. Pound?
Mrs. Pounds was about a Burlesque dancer from the 1950's, everyone wanted her but she wanted to escape from that life so she ran away. Before she became famous she fell in love with a man called Mr. Ming who took her to many places to eat Asian street food and gave his favourite stamp shop to her to hide behind. To remind her of the times when she use to travel, she created different types of street foods in her own way, with a contemporary flare.

What's the concept behind Foxglove?
We created Foxglove based on the theme of travel. Some people in Hong Kong don't get to travel that often, we wanted to create these spaces where you don't feel like you're in Hong Kong, where you feel like you're transported to a different era, where people can relax, enjoy themselves and their time with friends and family. If they are here for a business meeting, this is a perfect ice breaker. The story behind it is that Mr. Minza was a man who loved to travel. He named this place Foxglove which was his lost lover's favourite flower. Foxglove was used for medicinal purposes and it cures ailments to the heart, but if you have too much of it, it can become poisonous. He created this place so that one day she might come back to him.

What is most unique about Foxglove?
We provide live music, more bebop and swing, with different music performances each night. We recently flew in the Bloodest Saxophone jazz band from Toyko, they are amazing, just six guys playing all different types of instruments. Music itself, especially jazz, is so relaxing.

What kind of cuisine does Foxglove focus on?
European affair - It's about a British man Frank Minza, who loves to travel and grew up in the U.S. The speakeasy concept came about in the 1950's which is also why our interior has an airplane turbine, a train representing the Orient Express, we also have the ship. This gives us a lot of flexibility, there is always something new for each season. We started off with European affair and are now looking at reviving French history and the classic French bistro.

How did you come up with the story of Mrs. Pound and Mr. Minza?
It's actually based on real people, and we added a whimsical feel to it and gave it more depth to the storyline but for me, I was really quite inspired by Tim Burton movies. We have a story because it really engages people, I don't like to just create concepts that are just based on good food and good drinks, and we really feel that stories pull everything together.

Is there going to be a third story?
Of course, there's always going to be more. We are a group that's always planning to expand; we want to grow the place. Why stop now right?

Do you find it hard and contradictory as a speakeasy to get the word out about it when you first opened?
We don't do a lot of marketing but we find that once we invite some people in, people become intrigued and they talk about it. We wanted to keep it mysterious for people to discover, like an adventure. When we opened Mrs. Pound we spoke to people on the streets and we said to them, we want to show you something really cool. It was literally just word of mouth and it started spreading that way. We invited our friends to try out our food first, to make sure everything was perfect before launching. Honestly speaking, if a place is really good, the word will get out as Hong Kong is so small as well. Similarly with Foxglove, when we opened, it was completely empty. There are people that come to get their umbrellas repaired and we have to tell them 'sorry, we're actually not a repair shop, although we do sell umbrellas and merchandise, but we're actually a jazz lounge,' that way, it created a buzz and people started coming in.

How did you create the menus?
We like to keep it more traditional so that customers know what to expect. With Mrs. Pound, the three of us created the menu ourselves. There is a lot of trial and error, for example, the Rendang poutine was inspired from my background. I'm from Hong Kong but I was born in Toronto and I love poutine, so we created Rendang with mozzarella cheese, spring onions and spices, there's a mix of Malaysian and Indonesian cuisine with a Canadian twist. Before we even had Mrs. Pound, we were trying it in our own kitchens and had a few friends that helped. It was a lot of fun, because as we were eating we thought, 'why not add a bit of this and that, I wonder what it would taste like'. That's how we started playing around with different foods and so far it's worked out quite well as people are really enjoying it.

What's the best thing about being a restauranteur?
When people really, really enjoy what you're doing, this is something money can't buy. My happiness comes from when I see customers chatting with each other, talking about the food, laughing and enjoying the drinks and service. People say 'you did such a great job', but really it's my team that's done it.

Have you launched any new menus recently?
We have a new brunch that's just been launched at Mrs. Pound and features a lot of healthy additions like beetroot and kale salad, and guests can enjoy free flow of house red, white, Prosecco, Bellinis and Mimosas. The highlight of the brunch is that you can build your own Bloody Mary at their drink making station!