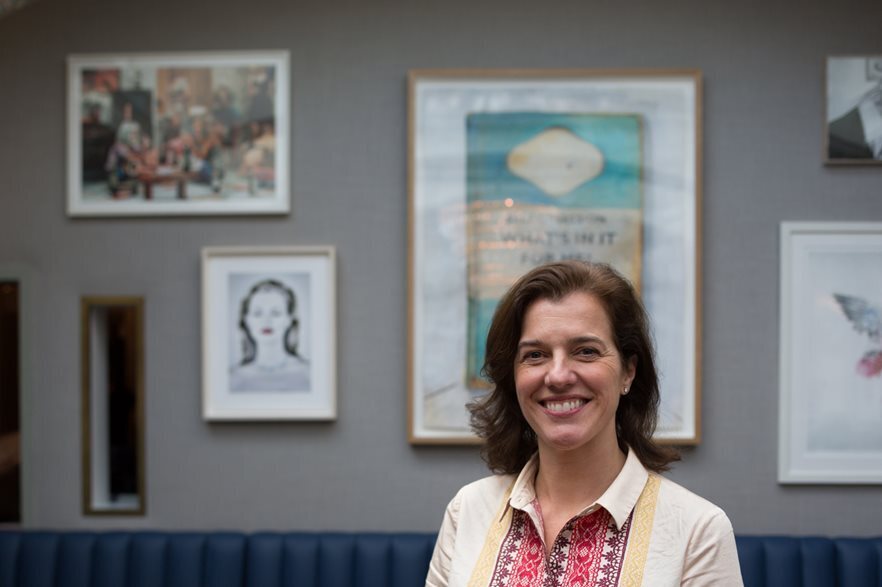 Nicky Carter serves two roles, that of curator for the Groucho Club and that of an artist, having created art with her husband Rob Carter for the past 20 years. Known for utilising techniques both old and new, Rob and Nicky's art is unique, and has become part of famous collections such as those of the Beckhams and Elton John. Ahead of their show at Ben Brown, and the Q Art Patrons tour of the Groucho Club's extensive collection, led by Nicky herself, she answers five questions for Noted.

Keven Amfo: What do you and Rob have in the pipeline right now?

Nicky Carter: Rob and I are currently working with a robot teaching it to paint portraits. We have been working on these 'Dark Factory Portraits' — named as such in reference to the fact factories can operate in the dark, as robotic systems don't actually need to 'see' what they're doing — for the past three years, and have now collated several portraits of famous artists such as Picasso, Andy Warhol, and Yoko Ono. These will be shown at Ben Brown Fine Arts in London from 12th February to 17th April April 2020.

Which three emerging artists do you have your eye on?

I have my eye on Flora Yukhnovich, a young British painter; Caroline Walker, a Scottish artist who paints realistic large-scale pieces of women at work; and Philip Colbert, the multidisciplinary Neo-Pop artist.

What is the last thing you saw/heard/ate/experienced that inspired you to make something, or that sparked an idea?

Several years ago, we heard that all jobs could be automated in the future — but art couldn't be. We thought we would challenge this assumption, and with the help of programmers and visual effects specialists, we employed AI and robotics into our new body of work. We always love using new technology in our studio practice and have previously used CGI and 3D printing… therefore it seemed a very natural progression for us.

Why is collecting art and supporting artists necessary?

Supporting and collecting both established and emerging artists is vital. For artists, living and working in a city such as London is nearly impossible. Artists have always needed support — art is about ideas, and without ideas and creativity, we would be living in a culture-free zone. Society needs art and artists.

You and Rob are experts in juxtaposing old and new... What is an old institution that you think needs a bit of reinventing?

Rob and I adore the Wallace Collection. It is one of London's hidden treasures… we often walk there from our home, walk around the galleries, and stay for a quiet drink to digest all we have seen. We would love to see the museum involve contemporary artists in their program. I know many who are influenced by the work they have viewed there.


Quintessentially's Art Patrons will visit the Groucho Club on 3rd March for a tour of their collection, led by Nicky Carter. Click here to learn more about membership.