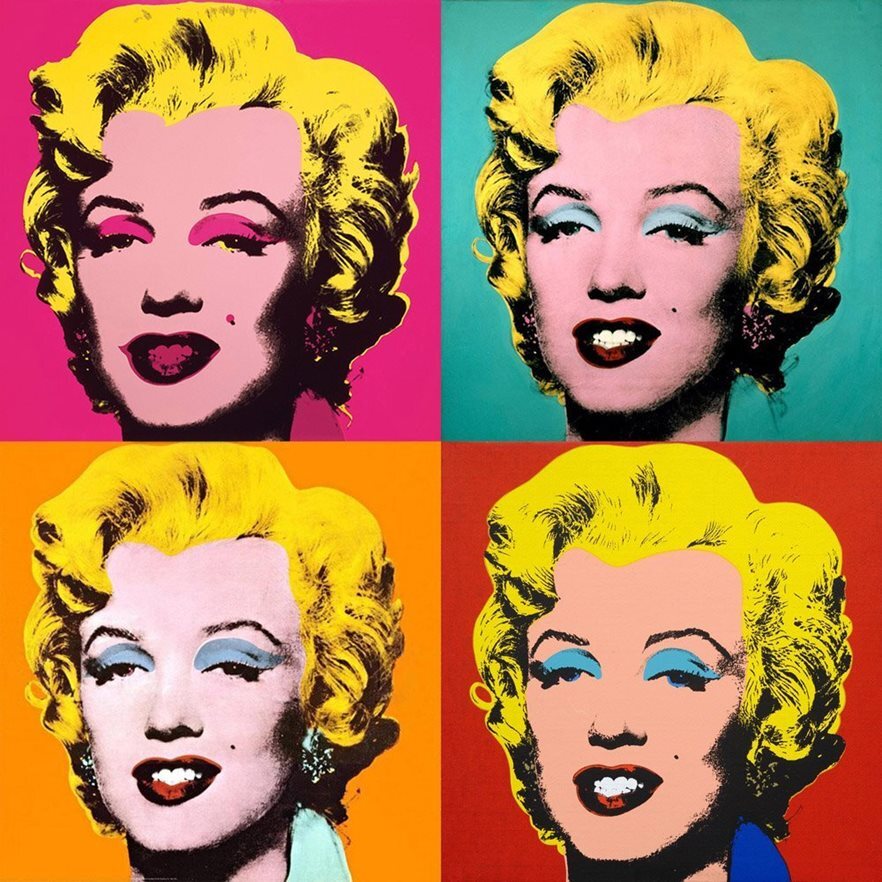 Andy Warhol (1928 – 1987) is one of the most emulated and significant figures of the modern art world. Shooting to fame in the 1960’s for his iconic pop art, Warhol’s willingness to experiment with non-traditional art-making techniques demonstrated his understanding of the power of imagery in shaping contemporary life. This quality galvanised his reputation as one of the most distinctive and globally renowned artists of the 20th century – an enduring legacy that grows more potent with every new generation inspired by the artist, be it through art, fashion or modern pop culture. Indeed, a recent collaboration with Calvin Klein Chief Creative Officer Raf Simons spawned entire Warhol-inspired fashion collections.

The Exhibition - an insider’s view by Natasha Silva-Jelly

Andy Warhol - From A to B and Back Again, a title derived from an entry in one of Warhol’s memoirs, occupies the entire fifth floor, as well as a portion of the third and the lobby of the Whitney Museum of American Art in New York’s Meatpacking district. It is literally a 40-year journey through the scintillating world of Warhol, spanning the artist’s life, early work, famed pop art era and ‘factory’ days. The ‘Factory’ was the name of Warhol’s New York studio where a bevy of superstars and underground models and actresses, including Edie Sedgwick, Viva and Taylor Meade would hang out, acting as muses for Warhol’s experimentation with film and photography. The groundbreaking showcase of this era was three years in the making and it is monumental and mind-blowing, or rather, it is mind-altering, true to Warhol’s own eccentric lens on the world.

There are too many highlights to outline here, but unmistakable are: the famous silkscreens of Marilyn Monroe, Elvis Presley and Elizabeth Taylor; the pop bright flower painting and cow wallpaper series; the legendary commercial work for Campbell’s soup and Coca-Cola; the collage silkscreen Thirty is Better Than One interpretation of Picasso’s Mona Lisa, (which caught Warhol’s eye when another of his muses, Jackie Kennedy, pried the original painting from the Louvre in Paris to the US) and Warhol’s early foray into TV and film, which redefined the digital era.

Warhol and his lasting legacy on art and fashion, by curator and Warhol expert, Donna De Salvo.

“I first met Andy in the early 1980’s when I worked for the Dia Art Foundation. We did some shows with him. The thing that makes Andy Warhol such an iconic figure is his persona; the way he dressed. He cultivated a look that was very different from what his contemporaries were doing at the time. Then there was the factory, the films and the superstars. He knew how to work the apparatus of celebrity culture. He took on the role of superstar himself, and perpetuated the notion that anyone could be a superstar. This became a seductive sort of enterprise that put New York at the centre of the art world at the time. This is the largest exhibition ever of his works in this country, and I love so many of them, but if I had to cite my favourites, I’d say I love the sunset prints. There are more than 600 of them; they are all homemade, and so beautiful and unexpected. And the Mona Lisa’s. Warhol is so influential because he came of age during a technological explosion of TV and photography. His work speaks to the early digital era. Today, we are bombarded with images, and you can create your own brand on Instagram, so Warhol was highly intuitive, ahead of his time, which is why his work is extremely appealing today. Warhol’s work is also connected to the world, and as a curator this speaks to my interest in art. The Campbell’s soup can, one of his most famous works, came about because he ate soup every day.”

Warhol, the early years, by Jean Wainwright, professor of contemporary art and photography at UCA.

“I first met the Warhol family in 1996, in Warhol’s birthplace of Pittsburgh, Pennsylvania, when I was doing my doctorate on Andy Warhol’s audio tapes. Warhol had died nine years earlier, and although I had never met him, I grew close to his brothers until their death, and I still retain close ties with the family. I spent many hours chatting to Warhol’s older brothers John and Paul Warhola, as they recounted growing up with Warhol in the industrial mining and steel city. Warhol’s parents, Julia Warhola, a former peasant and embroiderer, and Ondrej Warhola, a construction worker, had immigrated from what is now known as eastern Slovakia, in the early 1920's. Julia Warhola, who had a keen interest in art herself and who would later become a muse for her artist son, would encourage Warhol during drawing competitions around the kitchen table. She taught him to decorate Pysanky Eggs and ‘collaborated’ with him, fashioning flowers from Del Monte cans or paper, which they would sell door-to-door. As a child, Warhol contracted cholera; an illness of the nervous system, and he was somewhat of a sickly child”.

Born in the radio age, Warhol’s love of celebrity and Hollywood cinema dates back to his Saturday outings with his brothers, when they would go to the ‘talkies’ - talking images, moving pictures that featured dialogue - considered to be the earliest form of film. The young Warhol begged for a toy film projector, and, for 27 cents, he bought 16mm films of Mickey and Minnie Mouse, and Charlie Chaplin, which he screened on the wall. Warhol was 13 when he received a signed photograph from the actress Shirley Temple, which read ‘To Andrew Warhola’. It would become his most treasured possession. The photograph was later delicately hand-tinted, possibly by his brother John. It was Warhol’s brother Paul who taught him how to rub leftover wax from candles onto an image in a comic; reverse it and then press it with a spoon, thus transferring the image onto paper again. This influence was very evident in Warhol’s later work. He was also influenced by the religious iconography at his local St John Chrysostom Byzantine Catholic Church. The artist studied painting and design at Carnegie Institute of Technology in Pittsburgh, working as a window dresser for a local department store in the summers.

After graduating, Warhol moved to Manhattan in 1949. He dropped the ‘a’ from his surname and became a successful commercial artist and illustrator. His first job was at Glamour magazine, after which he went on to work for Harper’s Bazaar and all the major fashion magazines during the 1950’s. His mother followed him in 1951, living with her openly gay son in New York until 1971, when her own waning health sent her back to a nursing home in Pittsburgh. In 1966, Warhol shot the intimate film Mrs Warhol, starring his mother, and then-lover Richard Rheem as her husband, revealing a genuine friendship between the two. In the film, Warhola is animated and flirtatious for the camera. This in contrast to Warhol’s video a few years later for his Factory Diaries, in which he filmed her falling asleep. It’s a poignant homage to his elderly parent. Warhola died in 1972, though two years after her death, Warhol stated in an interview for Menswear: “my mother lives with me when she is not in the hospital”, and told friends that she was “shopping in Bloomingdales”. In 1974, the same year he taped The Philosophy of Andy Warhol, he created portraits of his mother (one of which is now on display at The Whitney) overlaying her face with finger painting, touching her portrait surface. In one version, the colours almost resonate in three dimensions from the flat canvas; radiating with oranges and greens.

Warhol anticipated our hybrid media age and understood celebrity culture. The mantra that everyone gets their 15 minutes of fame was inspired by Warhol's words: "In the future, everyone will be world-famous for 15 minutes", which appeared in the programme for a 1968 exhibition of his work at the Moderna Museet in Stockholm, Sweden. Warhol’s desire, however, was to be a lasting force in art history. In his book The Philosophy of Andy Warhol, Warhol reveals his competitive nature and love of reproduction, quipping to his editor Pat Hackett that when he’d heard that Picasso had made ‘4000 masterpieces in his lifetime’ he’d reflected, ‘I could do that in a day…the way I do them, with my technique.’

Today, Warhol’s work is reproduced and recontextualised by a legion of artists who cite Warhol as an influence, many by deliberately appropriating his work: Sturtevant’s Warhol’s Gold Marilyn (1973), Gavin Turk’s Me as Him (silver) (2005) or his Untitled Piss paintings x 12 (2008), Deborah Kass’ The Warhol Project (1992-2000) or Douglas Gordon’s Self Portrait of You + Me (2 piece Andy) (2008) in which we see ourselves reflected in the mirrored surface of Warhol’s partial fright wig portrait. The YBA (Young British Artists) generation of Damian Hirst, Gillian Wearing, Sam Taylor-Johnson and Tracey Emin have also adopted Warhol methods in their work. Emin told me that as a teenager she had wanted to sail to New York, to meet Warhol. Jeff Koons and Takashi Murakami are indebted to Warhol’s pop art aesthetic as well.

Andy Warhol - From A to B and Back Again is on now at Whitney Museum of American Art until 31st March 2019. For more information, get in touch with your lifestyle manager or speak to our New York team.