A day in the life of an art restorer 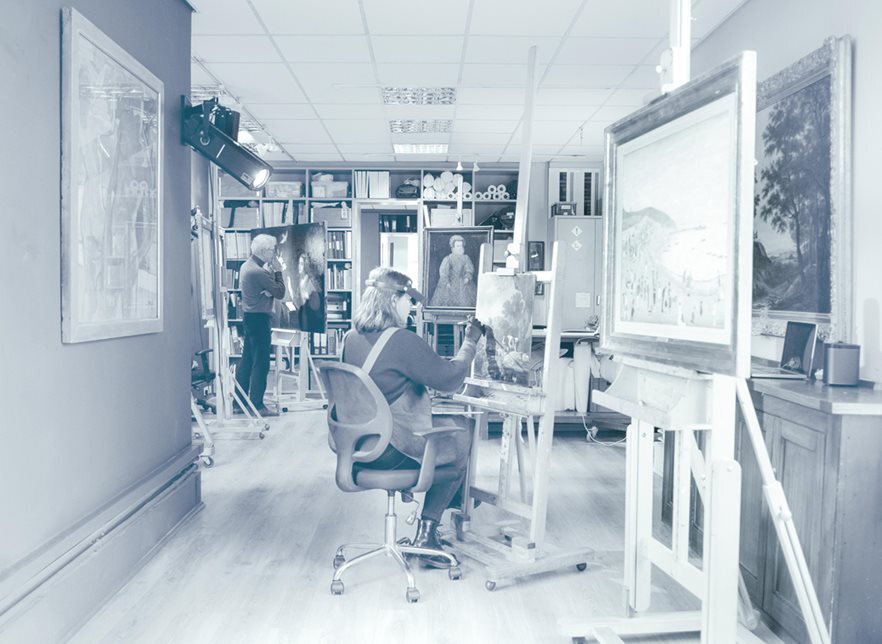 You might know Simon Gillespie’s face – he regularly appears on the BBC’s Britain’s Lost Masterpieces and Fake or Fortune – because his work as an art restorer goes far beyond the realm of mass entertainment.

Gillespie originally trained as a cabinet-maker and furniture restorer, but it was only when he was living in Mexico that he found his true passion after visiting a restorer/ conservator there, who seemed to treat art with disdain. “Seeing someone treat a cultural object with so little care gave me a desire to focus on a new career in the conservation of paintings,” he says. With steely determination and commitment to his new path, Gillespie studied under two prominent conservators and took chemistry courses to understand the science behind the techniques.

Today, Gillespie continues to challenge the notion of art restoration, and his studio is at the forefront of chemical technology used throughout the world across multiple mediums. Here, we speak to him about his daily routine, his career and the joy that comes from being alone with an old master.

How do you start your day?

Simon: After having breakfast with my wife and my two-and-a-half-year-old daughter Tigs at home, I scooter into work with Minks, my Yorkshire Terrier. I spend 15 minutes on emails in my office, then I catch up with ongoing restoration projects in the studio. I’m lucky to have a great team, the best there is, some of whom have worked with me for many years.

What is the difference between conservation and restoration?

S: Conservation is attempting to halt deterioration, whether from natural or environmental causes. It also involves structural work to canvas, wood or other supports. Restoration is the repair of a work of art and requires cleaning and retouching in an attempt to recreate the artist’s original design or intention – while preserving the patina most paintings acquire with age. This aspect of the job is essential to me.

What was the first piece you worked on?

S: The founder of The Body Shop, Anita Roddick, brought in a Pre-Raphaelite painting she’d found in her attic. It was filthy and had tiny pinpricks in the paint film throughout the surface, which was nearly two metres square. After it was cleaned, it took me a great deal of time to retouch, but eventually, the image emerged from what looked like a misty view through a net curtain.

What’s been your biggest professional challenge so far?

S: I remember a contemporary white painting that came to us, where a brick had been thrown through it by the disgruntled girlfriend of the owner! The perfectly woven white canvas was mangled and stretched. This seems like such a simple object, but in conservation terms, it is one of the more difficult things to restore. Currently, we’re treating a painting by Artemisia Gentileschi, a female painter, almost written out of male-dominated art history. It’s brilliant she’s been given an exhibition at the National Gallery next year. The work we have in the studio is a large painting of David and Goliath and requires hours of subtle retouching and glazes. It should turn out to be one of her grandest pieces.

How do you assess a piece of art for restoration/conservation?

S: Firstly, I ask myself, “Does it work?” In simple terms, is the artist’s intention working correctly? Does it lack purity of colour and depth of form? Are there distracting elements to the object – whether handling marks on a contemporary white painting, or mismatched retouching on an old master? I use a powerful torch to create a raking light over the surface to find inconsistencies. I also use a pocket UV (ultraviolet) light, which can confirm later retouching or interference.

What is your favourite type of art to work on?

S: Portraiture. Great artists, when painting someone they know well, like a family member or friend, establish not only an exact likeness but also capture the essence of the sitter. When the most accomplished portrait painter captures the person they know most intimately, i.e. themselves – with a self-portrait – they create a moment of wonder. One that comes to mind was a self-portrait by Frans Hals, a great, and very flamboyant portrait painter of the 17th century. I usually find those quiet moments at the end of the day the best time to concentrate on these most delicate works. Everyone else had gone home, and I settled in with a beautiful piece of music and a glass of wine to be alone with the self-portrait. I found myself in precisely the same posture as the painting and carrying out a series of similar actions that Hals would’ve made. I was repairing a highlight on one of the eyes and putting my fingerprint where his would have been. I felt as though I’d travelled back in time.

What’s the most surprising thing you’ve learnt about a piece of art while working on it?

S: Once, when removing a massive amount of overpaint from a late 17th-century portrait of a woman, we discovered a quarter of the painting in the bottom right had been cut, indicating something had been removed. At the same time in the studio, we were treating a small painting of two children, and on closer inspection, it became clear that the portrait of the children, although brought in from a completely unrelated collection, was actually part of the same portrait. For two sections of the same painting, separated for possibly 250 years, to be coincidentally reunited together in my studio was an incredible discovery and surprise.

Finally, who are your dream dinner-party guests?

S: I’ve had many memorable hangovers with many great living artists, but I’d relish an evening with Anthony van Dyck, who changed portrait painting forever. He was also a fascinating character, a great traveller, diplomat and socialite. I’d have loved to have seen him in action with a loaded brush. I’d also have liked to hear Benjamin Britten talk about his music and to have listened to him play. Another one would be Salman Rushdie, author of Midnight’s Children. He created a work that infuses the smells and noises of India with layered stories from the multiple characters in this ‘book of books’. All this was achieved before the computer came along. I lived in India as a child, and he reconnected me with my memories of the place. I’d also like to add Catherine the Great, who could come after dinner and show us her favourite pieces from the Royal Collection. It would be fun to see her with Lord Duveen, one of the most exceptional art dealers from the early 20th century. These people are or were all on a quest for magnificent beauty and were charitable with their knowledge of it.

Quintessentially’s Art Patrons were recently invited to a behind-the-scenes tour of Simon’s studio. If you’d like to know about any other exclusive art events, please email: tali.zeloof@quintessentially.com