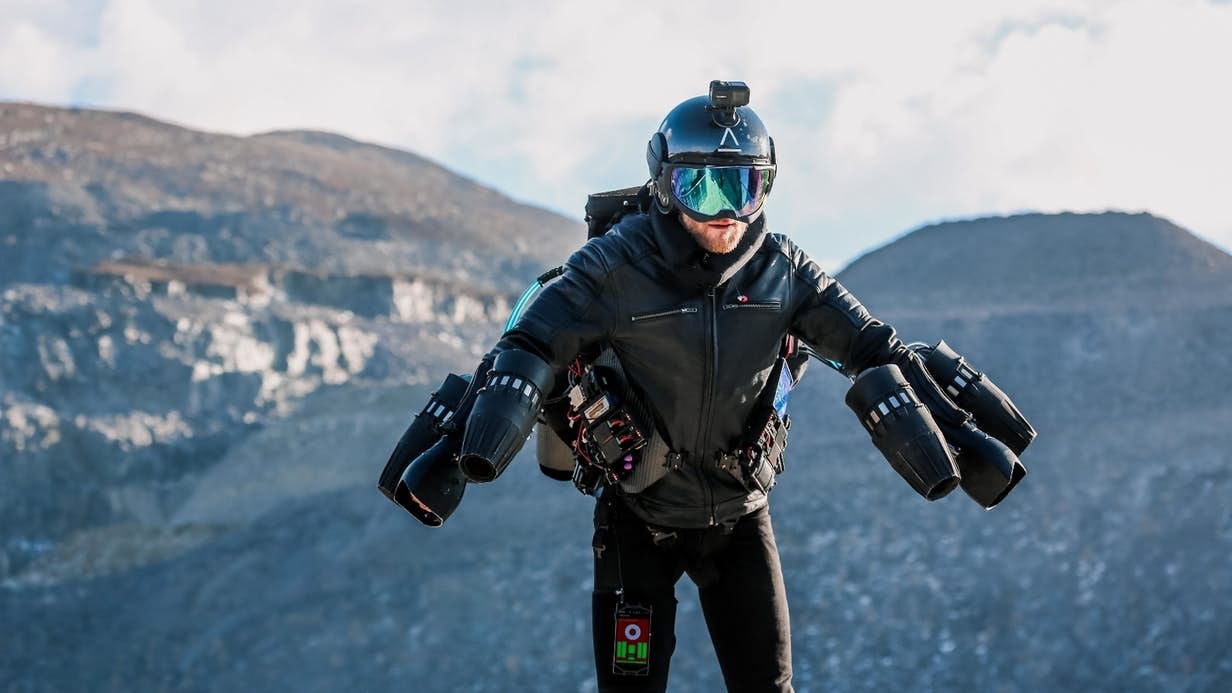 Last month, we introduced you to British inventor Richard Browning whose Gravity Flight Suit invention had us all talking about where we would go if we could fly in it. Recently, he had more time to catch up with us, so we could get to the bottom of his ideas and what he thinks about being dubbed the 'real life Iron Man'.


Quintessentially: Can you explain to us the thinking behind the name of your exoskeleton suit and the experience of flying in it?

Richard Browning: When we started working on this project more than a year ago now, we didn't really have a name in mind. But it was my young son who's obsessed with ancient superhero legends and characters, who came up with the name Daedalus, all by himself. Nothing to do with me, funnily enough! Daedalus is the father of Icarus. But the problem with that name is that it's not the easiest to pronounce - and can be quickly mispronounced to sound a little too much like the word 'death' - so from a branding perspective, maybe not the best move, but that's where it stems from! From a practical point of view, that's why I no longer use that name officially for the suit and stick to the Gravity Flight Suit.

Q: We think that's a charming backstory though, and rather fun and unique.

RB: Yes, that's one of the variants of the suit – Daedalus Mk1 – and as we progress in our development of the suit, we are changing and evolving in the way we refer to it.

As for the experience of flying in the Mk 1 suit, well, there are two quite impactful aspects of the whole experience. The first one being that clip that we showed in the TED Talk of me flying in the suit for about 66 seconds around the farmyard. That was a pretty big moment and it had a great impact on people who saw it.

But then the first - what I would call - 'proper' flight of the Daedalus Mk.1 suit was at TED Vancouver, back at the end of 2017. As with any moment that involves unveiling a prototype in the realms of technology and engineering, you're filled with that intense mix of excitement and apprehension. You think: "Will the technology work?" You're in front of an audience that includes the likes of Richard Branson and Elon Musk, so the feeling is pretty intense. But that unprecedented sense of freedom as your feet leave the ground and you're up in the air, well, nothing can really describe that. That was a big moment. You feel at peace floating up in the air, and yet there's this incredible energy coming from the thrust power of the jet-fuelled engines. Quite incredible…

Q: Who do you think the suit appeals to?

RB: There are several elements or sides to this suit. So first off, it appeals to people who are attracted by the 'superhero' aspect. Then, there are those who have a deep-rooted aeronautics heritage, who are obsessed with jet harriers and helicopters, that kind of thing, they usually tend to be late-middle-aged men. And then, you have a wider group of people who are generally impressed by what it's taken to reach a goal largely considered as impossible or unachievable up until now. One of the recurring messages is how inspired people are by the journey to get to where we are with this suit. And how inspired they are to see a human being flying around (much cooler than CGI), and them actually feeling the power of that 1000-horsepower resonating in their chest. It entirely captures their imagination. I think it also relates back to the magic of the Tesla - Elon Musk phenomenon and our fascination with all these kinds of things. It's all linked.

Q: What do you think your suit means for the luxury end of the tech business?

RB: If the extreme luxury market is all about bringing super-exclusive experiences to people who are able to access the very cutting-edge, then this suit is highly personal. You don't have to turn up or book somewhere to do it; you can repeat it and experience it in your own back garden if you wish. And it's extremely accessible to those with means. Not to mention utterly unique.

Q: Given the fact that the suit has garnered such intense scrutiny around the world and provoked an international media frenzy, have you received any outlandish requests?

RB: I've been asked to skin the suit to replicate a sushi robot who flies into an event. That was pretty unusual.

Q: What other developments do you see coming with regards to exo-suits, or personal aviation devices?

RB: This is just the beginning. We never thought we'd get to this, but now we have, it's opened up a whole new area of human mobility and aeronautics. It's very exciting.

We're working on making the system electric, with all the interesting extra capabilities that brings with it. Without going into too much detail at this stage, we are also working on broadening the aerodynamics, which could yield results for Special Forces. All of this, in combination with developments elsewhere with human mobility and aviation, such as with Tesla, or with early-stage electric aircraft in the pipeline. We're at the dawn of a new electric-driven transportation era that will not be limited to the ground.

Q: In light of all these elements we have to look forward to then, how would you like to see your suit developed?

RB: I guess to be able to go faster and higher safely. We can do those two things right now, but we need to be sure we can do them safely. And making things more efficient and streamlined.

Q: More generally how do you think technology will change the way we travel? What sort of developments can you see coming?

RB: I'd say VR (Virtual Reality). We've built a VR simulation of the flight suit, so you can put on the VR headset, look down at the arm mouse of your suit and fly around in a very similar fashion to the real thing. I think that travel will steadily be affected by augmented or virtual reality so that you will be able to, for example, take a virtual tour around the pyramids of Egypt, away from the crowds, in your VR headset, instead of having to go to the trouble of travelling there and queuing up. I think there is a section of society to whom that appeals. Couple this possibly with AI so that you can hold up your iPad or Google glasses while you're in the pyramids and get a personalised commentary on what you are seeing. We're already seeing this in museums.

Q: Is there anywhere you still dream of flying over to these days?

RB: Definitely over water. Firstly the risk of any serious damage is drastically minimised and secondly, there's something absolutely awe-inspiring about flying over the sea or any body of water. Be it the surf break in Australia, over the Indian Ocean and the Maldives, or the River Thames. Talking of which, keep your eyes and ears open for a potential stunt over the Thames very soon.

Q: We surely will.


Click here to view Richard Browning take off in his Gravity Flight Suit.

If you'd like to get off to a flying start in Richard Browning's Gravity Flight Suit or indeed if you have a taste for any other extraordinary experience you'd like us to tailor for you, why not contact our team of specialists at Experiences@quintessentially.com for all the planning expertise you need?