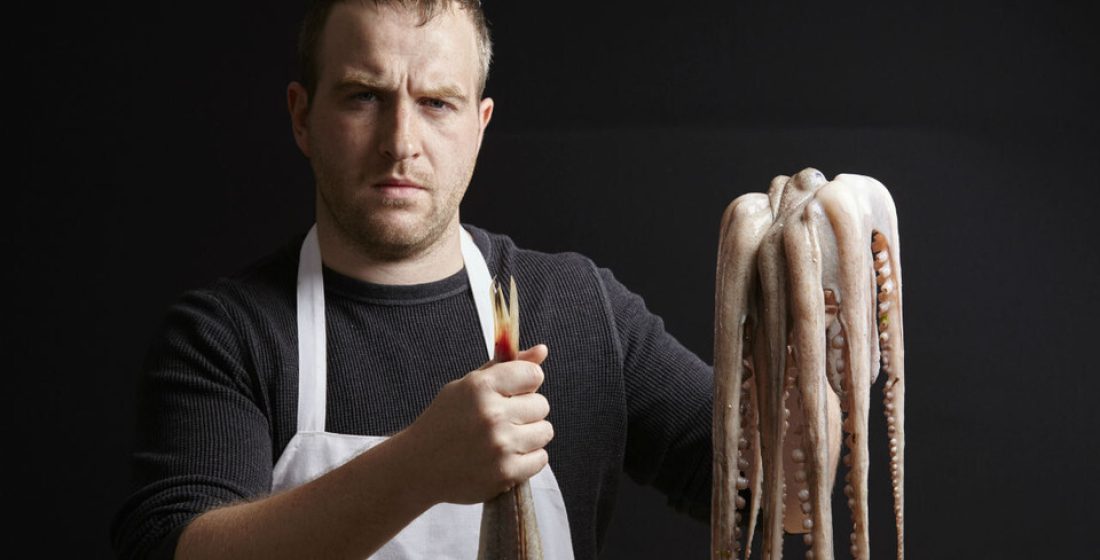 Q: What made you decide to enter the Masterchef competition?

Tom Whitaker: My wife actually. I've always been quite into food, my mum trained as a chef and we've always been a foodie family. My wife and I lived abroad in Italy and it was there that I got obsessed with food and ingredients. When I got back to the UK I still worked in advertising but found that I was spending more time thinking about what I was going to make for dinner than doing my job. She said I needed to do something about it and in the end she filled in the form and entered for me.

Q: You've become known for your takes on British classics, are there any other areas of the world that particularly inspire your cooking?

TW: Italy, France and Japan. They all do different things; Italian food is so simple and that's what makes it perfect – it's so ingredient-based and about finding the best produce and doing as little to it as possible. I was inspired by the Italian mentality: that it's good to be proud of food sourced from your country so I thought I would take this and apply it to the UK, where the produce – be it fish, meat, vegetables – is some of the best in the world. For me, being able to champion that idea and being able to source all my ingredients from the best regional suppliers is really exciting. My mum's side of the family live in Cornwall – they're fishermen – and it's so exciting to receive a crab that's half a metre wide and start taking it all apart. The more I cook the more I regress back further into the process; I've learnt to be a butcher, I fish and I shoot and as much as possible we do everything from scratch for every job. I would love to explore more about Japanese cooking; I love the idea of using as much of an animal as possible and feel like Japanese are similar to Italians in the sense that they really care about ingredients and quality.

Q: What is your favourite restaurant in London at the moment and why?

TW: Very easy – I've eaten there four or five times now and it is consistently excellent: The Ledbury in Notting Hill. For me, it's a great all-round experience; the venue is lovely, the staff attentive and the food is always superb. It's killing it for me at the moment.

Q: What are your thoughts on the lack of women in restaurant kitchens?

TW: I think it's changing. Traditionally, kitchens have been very masculine environments; some can be really quite obscene and bring out the base mentality in people and women can be exposed to a certain amount of misogyny. I do think though that there are many more girls working in kitchens than in previous years and excellent female chefs are making it to the top.

Q: What gave you the idea to start a private dining business?

TW: I found that most chefs are terrible with people – they're great in the kitchen, dogmatic and assertive but put them in front of a client and they're bumbling and staring at their feet. I was used to engaging with people from my years in advertising so it was a natural marriage of being able to cook and enjoying interacting with people. What I like about it is it is bespoke; we don't present menus to people, instead we reverse the process and go to people and ask them what they want. We never do the same menu twice, which keeps me entertained as well. I always say to people when hosting, it has to be what you want; everybody wants to do something different and we need to support that. We're pretty flexible in terms of what we do; we've had some weird suggestions before…

Q: Are there any that stick out in your mind as being particularly exciting or unusual?

TW: We were asked to do a job in a gallery in Shoreditch. We usually get a chance to scope out a venue beforehand but for some reason we didn't this time, so we got to the venue and discovered that the kitchen was the size of toilet cubicle and was stacked floor to ceiling with boxes. We had to build a kitchen in the corridor – which was basically a thoroughfare – and cook with no running water with the fire alarms going off constantly because of the smoke. So that was interesting! The best ones where people say 'go nuts' and really mean it because it means we have full creative licence. I was also a Chef de Partie at Kate Moss' wedding, which was an unusual affair; there wasn't a lot of eating but it was great catching the drunk A-listers staggering out of the marquees.

Q: What are some of the highlights on the menus you create?

TW: I have a big thing for mackerel; probably a dish that gets served more than any other is our mackerel served three different ways. It's a very dainty, summery, feminine dish. Another area of training I specialise in is charcuterie, I love making pates and terrines. It's a very specific skillset; it's actually more akin to pastry than any other area of cooking in that it is a very precise and defined process. To have a real flare for it nowadays is rare and I try to use the skill as much as possible.

Q: Are there any chefs in particular who inspire your cooking?

TW: Daniel Humm who runs the kitchen at Eleven Madison Park in New York. I just think his food is very beautiful and creative, with clean simple flavours. I'm also a fan of Fergus Henderson – owner of St John in Farringdon – who is the complete other end of spectrum and promotes a very blood and guts style of cooking. He uses the bits that other people would throw away – and I love that whole nose to tail concept.

Q: What advice would you give to budding chefs?

TW: Don't do it unless you really want to do it. Do it because you love it and because you want to cook.

Q: What future projects do you have on the horizon?

TW: Potentially my own restaurant…a guy I've worked with for a long time who runs a wine company has found a site and wants to do a joint venture with me. It's on the cards but in the very early stages at the moment. I've also been approached for a book by a few literary agents but feel like I just don't have the discipline for it right now!

Dress your home for autumn

The magic of Mid-Autumn Festival & mooncakes

Celebrate the enduring bond of family with these beautiful gift boxes.