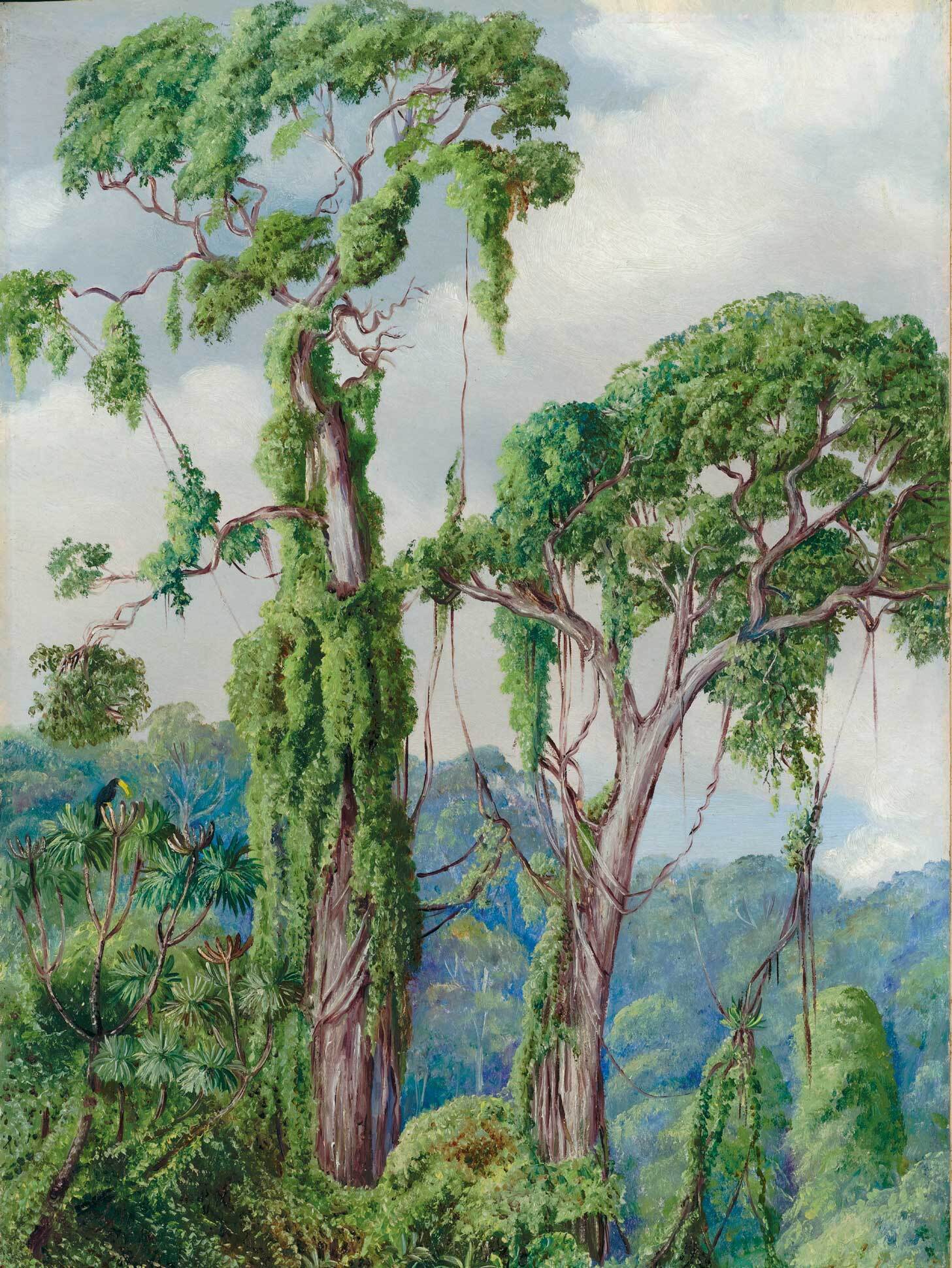 The Royal Botanic Gardens at Kew is an undoubted national treasure. In this corner of south-west London, you’ll find 440 green acres of gardens, sheds, greenhouses and hothouses all dedicated to the wonder of plants, and the animals that rely on them for sustenance and shelter. One of the key members of staff is Tony Kirkham, Kew’s head of arboretum, gardens and horticultural services.

Originally from Darwen in east Lancashire – something that can be heard in his soft north-west accent – the 62-year-old has been at Kew for 41 years. In that time he’s become one of the world’s leading experts on trees, speaking at conferences, lecturing students and professionals, and working on several TV programmes and films about trees.

His most recent venture is a book, Remarkable Trees. Co-authored with botanist Christina Harris, who’s also the editor of Kew’s magazine, it profiles 60 of the world’s most astonishing varieties of trees. If you’ve any interest in natural history – or learning endless did-you-know? facts about these vital plants – it’ll be very much your thing. So, as a taster, we talk to Tony about a life in trees, and just what makes them, well, so remarkable.

AT: You’ve said you wanted to work with trees by the age of 10. How did it come about?

TK: I was at home one day, and saw a TV programme called Look Strange about a man who’d bought land and was growing trees in Surrey to plant them later in Scotland. At the end of the programme, it said it did a training course for apprentices. I applied for it, got on, and moved from Darwen to Farnham in Surrey. That was the start.

Going back to basics. What exactly is a tree?

According to the dictionary, it’s a plant that makes wood every year on a single stem, and is over two or three metres tall. The trunk gets bigger and produces major branches. You get evergreen and deciduous (with leaves that drop every year), plus conifers, which produce needles – though which act in the same way as leaves.

Do trees have any similarities to animals, including humans?

Yes. We can compare a year in the life cycle of a tree with us in a day. There are five things we do in a day. We wake up. We get dressed. We feed. We work. Finally, we go back to sleep. In a year, that’s what a tree does. So, the tree wakes up in spring. It ‘gets dressed’ by putting new leaves out. Then it feeds through photosynthesis from the leaves in late summer. From then to autumn it ‘works’ – ie it puts on wood and bark, and stores carbohydrates for the following year. In late autumn it goes to ‘sleep’. Trees in temperate zones like the UK need a rest. They’re like us. They need the seasons.

The English oak. It makes a big tree and lives a long time. It’s wide-spreading and has easily identifiable lobe leaves and acorns. And one of the critical things about it is that it’s an incredibly important habitat for biodiversity. One large tree supports something like 2,000 insects, birds, fungi, and mosses that live in and on it. It’s also one of the most valuable timber trees we have – oak furniture is highly desired and long-lasting.

We have more ancient oaks in England than the whole of Europe put together, which goes back to the ancient hunting laws. The aristocracy wanted to hunt deer, and deer need trees, so they put in legislation to stop trees being felled. This was purely to preserve game for hunting, which they didn’t do in mainland Europe. Hence we still have our oaks.

Why does it thrive here in particular?

It’s got those four seasons it needs to grow. There are something like 4-500 oak species from around the world, and they all require different climatic zones. However, it’s under threat. Firstly, from diseases and secondly, climate change. As it gets warmer, the oak is migrating north.

Do you see differences because of climate change?

Yes. We have 14,000 tree species at Kew, and there are trees I can grow outside now. I couldn’t when I first arrived 41 years ago.

What about Dutch elm disease?

There are still enclaves of elm around, but they only get to approximately 15 years old. The bark changes at that age, which is what the beetle that carries the disease wants. After that, the tree usually dies.

Redwoods have always fascinated me. There’s the coastal redwood, and the giant redwood. The coastal redwood is the tallest tree in the world: it’s located in California and gets to 115 metres high. That’s a tall tree. Imagine how far Usain Bolt runs in the 100m, that’s how tall it is – and then some.

The hairs on the back of your neck stand up, and you get this tingling feeling all over your body. You just want to take it in. It’s usually very quiet, too. You’re standing among trees that feel like chimneys as there are no branches for the first 20 or 30 metres. Some of these coastal redwoods are 600-1,000 years old. Then you go to see the giant redwoods, the biggest trees in volume on the planet, and they’re about 3,000 years old. They’re monsters! And you think, what have they witnessed?

Why have they grown so much?

We forget trees come from woodland. It’s rare to get a tree growing on its own. They’re social beings – they help each other, and they network. And a tree grows tall because of competition. If it stays short, and others grow tall, it won’t survive.

If they’re social beings, how do they talk?

They don’t talk, but they do communicate. Underground, you get roots that fuse. They share resources, they move things around and work with fungi to make them more drought-tolerant and resistant of aggressive pests and diseases. They can emit pheromones that we can’t smell, but other animals can. For example, when the pine tree is under threat from aphids, it emits a smell that’s like blood in the water to a shark – but to ladybirds. They pick up the scent, zoom in and eat the aphids.

Tell us about another remarkable tree.

Metasequoia – the dawn redwood. It wasn’t discovered until 1941 in China. A forester was doing a firewood audit, saw the tree and didn’t know what it was. He sent it off to one of the universities, and they identified it from fossil records. There was only one of them around. Now, it’s the most planted tree in the world – it’s got a beautiful conical shape and is incredibly resistant to pollution, which it’s carried through from the Jurassic period.

We talk a lot about how trees are vital for life on earth. But what exactly do they do?

First of all, they give us oxygen. Without them, there’s no life. They absorb the carbon dioxide we breathe out. They turn it into oxygen which we inhale. They’re carbon sinks, too. A big oak is probably banking five to 10 tonnes of carbon. That’s what creates wood which helps it stand up. They also cool the atmosphere and give us shade. If climate change continues at the present rate, we’re going to need them to take shade under.

There’s a tree that’s specific to London, too, isn’t there?

That’s the London plane tree, which is excellent for pollution tolerance as it absorbs dirt and grime in the air. It sheds its bark and produces a white trunk – which is a way of cleaning itself. It breathes through the bark, and when it’s clogged up, it discards it.

On that subject, what does bark do?

It protects the cambium, where all the new growth is happening. It’s like our skin. The cork oak in Portugal and Spain, which we use for stoppers in wine bottles, is an example. Cork is a waterproof bark we harvest every nine years.

Then there are healing trees…

The tea tree produces an antiseptic oil that we use more and more. Youngsters with acne can use it, and if your hands are dirty, you can clean them with it. Then there’s quinine. We use it in gin and tonic, but it’s also a cure for malaria. Which is why people used to drink a lot of gin in tonic in tropical countries as it would protect from the disease.

Returning to Kew. What do you do here?

I’m head of the arboretum, gardens and horticultural services – basically, everything that’s outside. We have 14,000 trees. It’s a living reference library of trees that scientists can come and study. But they can’t take them away! I’m also responsible for 100 staff, with managers who specialise in different plants from herbaceous borders to grass.

Is grass a tree?

No. If you walk into a forest, you don’t find grass. Mown grass is a big competitor for trees. It forms a thatch, and it compacts, so rain can’t get through. However, trees look good growing in it, so you have to compromise.

Tell us about the book you’ve written with Christina Harrison.

It’s actually my seventh. The previous ones have been technical, though – and aimed at professionals. This is for people who have an interest in trees and want to learn more. It’s essential to raise awareness of them, and the more we do that – through books, TV, and magazines like this – the better. Between us, she did the 30 tropical trees. I did the temperate ones.

How are tropical trees different from temperate ones?

A tropical tree doesn’t have the seasons like temperate one – north or south of the tropics – does. Take teak or mahogany, both important timber trees from Asia. They produce solid and durable wood. Most outdoor furniture is made from teak. However, it’s got to come from sustainable resources.

Do trees have rivalries with other species?

Yes. You see competition between them in forests. You have ‘pioneer’ species, like birch and willow that establish ground very quickly. But they provide habitat for the longer-lived specimens, who’ll eventually they’ll shove out the pioneers, as they live longer.

Like any living thing, a tree comes to the end of its useful life. A birch can live for 40 years – an oak can live for 500. An oak tree spends a third of its life growing, a third living and a third dying.