101 — The Electrification Of Classic Vehicles 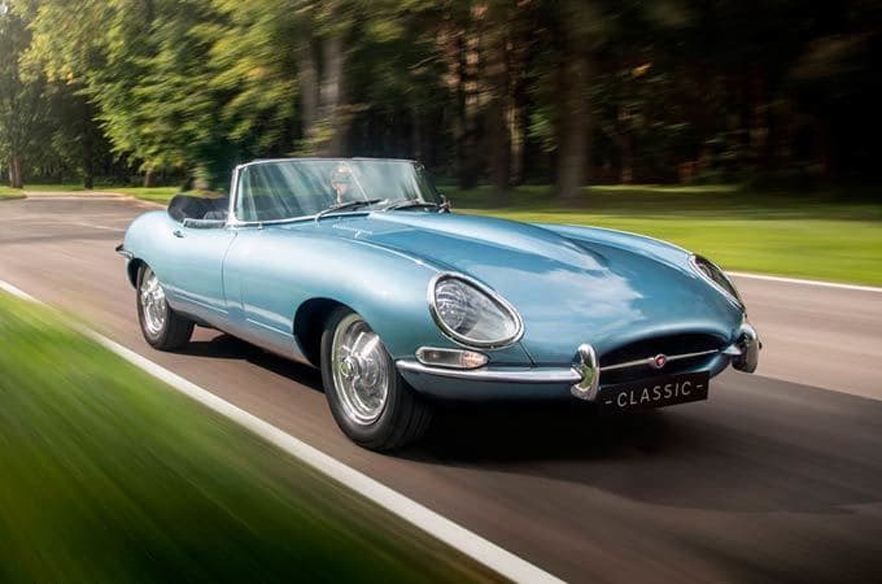 Nick Johnson can remember the moment when the classic car truly entered the electric age. It was on 19 May 2018, when Prince Harry rounded the bonnet in a silver-blue, 1968 Jaguar E-Type, and drove his new wife Meghan away from St George's Chapel in Windsor. The car itself might have been half a century old, but the running gear was thoroughly 21st century; Jaguar Land Rover had given the Royal couple a prototype vehicle that had been converted to electric power. 'People went wild for it,' recalls Johnson, the director of AutoPrivé, a London-based automotive concierge service. 'You had the elegant look of a Jaguar E-Type, but the ecological credentials of an electric car. Jaguar was swamped with orders.'

Unfortunately, those orders are unlikely to be met any time soon, as Jaguar Land Rover has pulled the plug on this the project, called Jaguar E-Type Zero. However, there are still ways for drivers to indulge in classic motoring, without contributing towards the very modern problem of climate change. AutoPrivé offers its clientele a wide range of services, from vehicle sourcing and restoration, through to importation, export, storage and consignment. 'A client might come to us to get hold of a certain car,' says Johnson. 'We might protect their privacy if they're in the public eye, work on restoration if it's a classic model, or assist with the bureaucracy of the ownership side. Often, they will come to us when they want to sell their vehicle.'

Though Johnson does deal with some dedicated car collectors, many of his clients are wealthy individuals with a passion for nice vehicles, but limited enthusiasm for the shortcomings of old automobiles. 'Many of my clients think, I've always wanted a classic car, but I've been put off by the maintenance and lack of reliability,' he says. Indeed, some have learned the hard way. Johnson can recall a period a few years ago when many on the London scene wanted a certain model of Mercedes from the 1960s. 'They were incredibly elegant cars; they looked wonderful,' he says. 'But, inevitably, clients would spend a lot of money on the car, go away on an assignment, return to their garage three weeks later, and it would have leaked oil, or the battery would be flat. Interest in having such a vehicle dries up pretty quickly.'

Fortunately, there are now a handful of classic car restoration firms in the UK, US, and continental Europe that specialise in turning vintage petrol models, such as the Jaguar E-Type, into fully functioning electric cars. Post-conversion, expect to find drive trains, fast-charging batteries and regenerative breaks you might typically see in a Tesla or other electric vehicle. These conversions not only improve a classic car's reliability, but they also help to ease a driver's conscience in a world increasingly concerned with CO2 emissions.

'A Normal E-Type or classic Mercedes will look exquisite, but for some people, the moment you drive off, the car stinks, because the fumes,' says Johnson. 'That doesn't sit right with a lot of clients today, who are often in the public eye. Electrification removes that aspect.' Of course, an electric drive train won't slot neatly into every car. Electric engines are often lighter than their petrol or diesel counterpart, batteries usually more substantial than a full tank of fuel, and balancing a car, so it sits well on the road, is a challenge.

Though he has come across classic Minis that have been electrified, he doesn't recommend the conversation of comparatively cheap vehicles, as the costs are so high. Similarly, he has yet to come across a Ferrari that has had its engine removed and replaced with an electric version. 'I think the engine is such an integral part of those cars.' He also says that some very traditional car restoration firms won't take on electrification commissions. 'They view the process as sacrilegious,' he explains. 'It's taking the heart out of a classic, and in their view replacing it with a soulless engine.'

Yet Johnson argues that more progressive restorers can work around a heritage model's limitations and a client's expectation, finding the right drive train and dashboard to suit both contemporary and classic tastes. 'A lot of work has gone into adapting, say, an old rev counter to show amps instead, or a fuel gauge to indicate the range left in the batteries,' Johnson explains. 'You glance at the dash, and you really can't tell its electric.' Not that there's any shame in going electric. 'I think this process rejuvenates classic cars,' he says. 'The classic car audience tends to be quite mature, while the demand for this sort of technology and reliability is often younger.'

He also understands how a well-made electric classic car could allow younger drivers to distinguish themselves in cities such as the British capital. 'Lamborghinis are ten a penny in London, but if you've got a cool E-Type, you will stand out,' he argues. And while a good classic car conversation currently requires specialists such as AutoPrivé's contacts, Johnson can foresee a time when half the vehicles in a classic car showroom would be electrified, and marques such as Jaguar and Aston Martin will themselves offer electrification of their older models.

For those ever so slightly nostalgic for the days of fossil fuels, some conversion firms even preserve the old engine as a kind of memento. 'The engine can be mounted on a plinth so that the client can show their son or daughter,' explains Johnson, 'and say 'that used to power the car.''

For information on how to electrify your car, reach out to your luxury lifestyle manager to be in touch with AutoPrivé or another similar agency.