After 30-course tasting menus (at Minibar by José Andrés in Washington) and pop-ups themed on retro situation comedies, is there anywhere left to go for fashionable cuisine? Of course there is. We’ve got the skinny on the newest – and finest – dining establishments currently taking reservations. 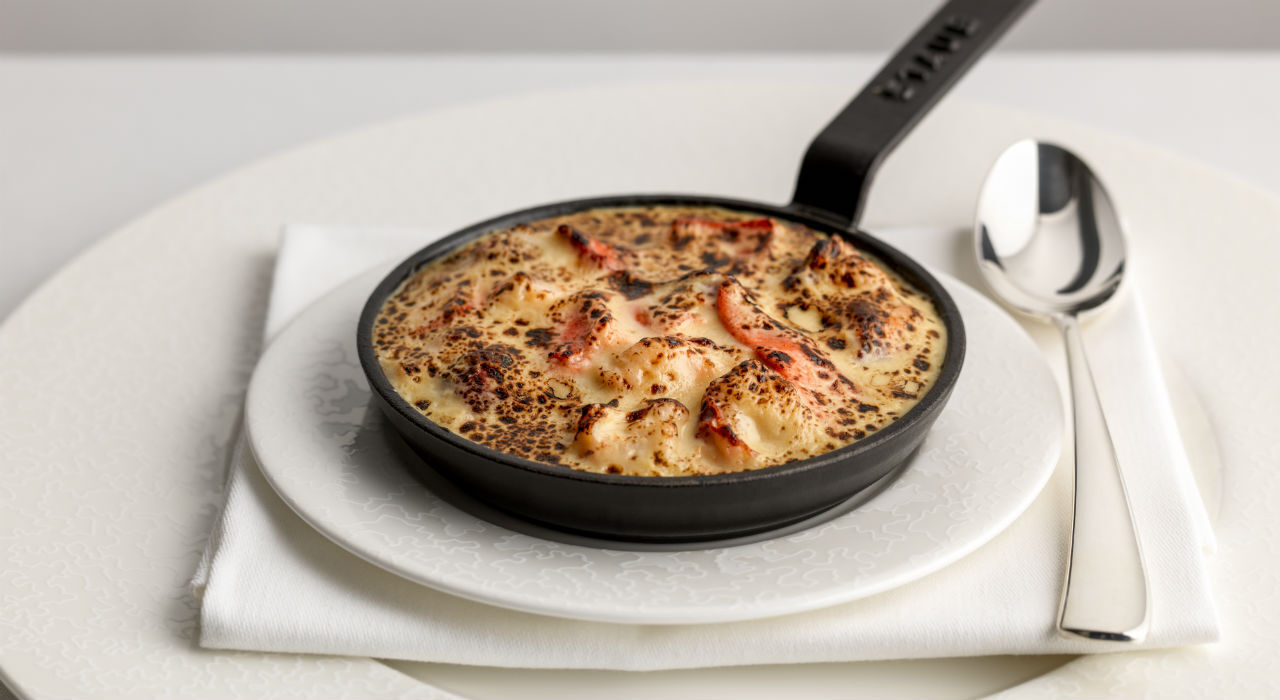 Best for: New British with a twist

Head chef: Tom Kerridge is a very British kind of foodie with an understated approach to culinary over-achievement. His gastropub The Hand and Flowers was the first inn to be awarded two Michelin stars, but he claims to “not be a Michelin star kind of guy.” He’s the presenter of heritage BBC show Food and Drink and does incredible things with pork belly.

On the menu: Kerridge has made a point of appointing team members from his genre-defining gastropubs at this Northumberland Avenue location within Corinthia Hotel London. The menu breathes new life into traditional British favourites, notably the deep-fried Cod and Chips with Pease Pudding, Tartare and Matson spiced sauce, and the banana custard accompanied by dates, honeycomb and frosted pistachio.

Ambience: There’s plenty to take in, including a centrepiece golden suit sculpture by Kerridge’s sculptor wife Beth Cullen that casts a wry shadow over London’s financiers dining within, and glass-fronted fridges bearing hunks of hanging meat. No wonder The Guardian food critic Grace Dent described Kerridge’s as “a big, broad and brassy birthday treat-type of restaurant.” 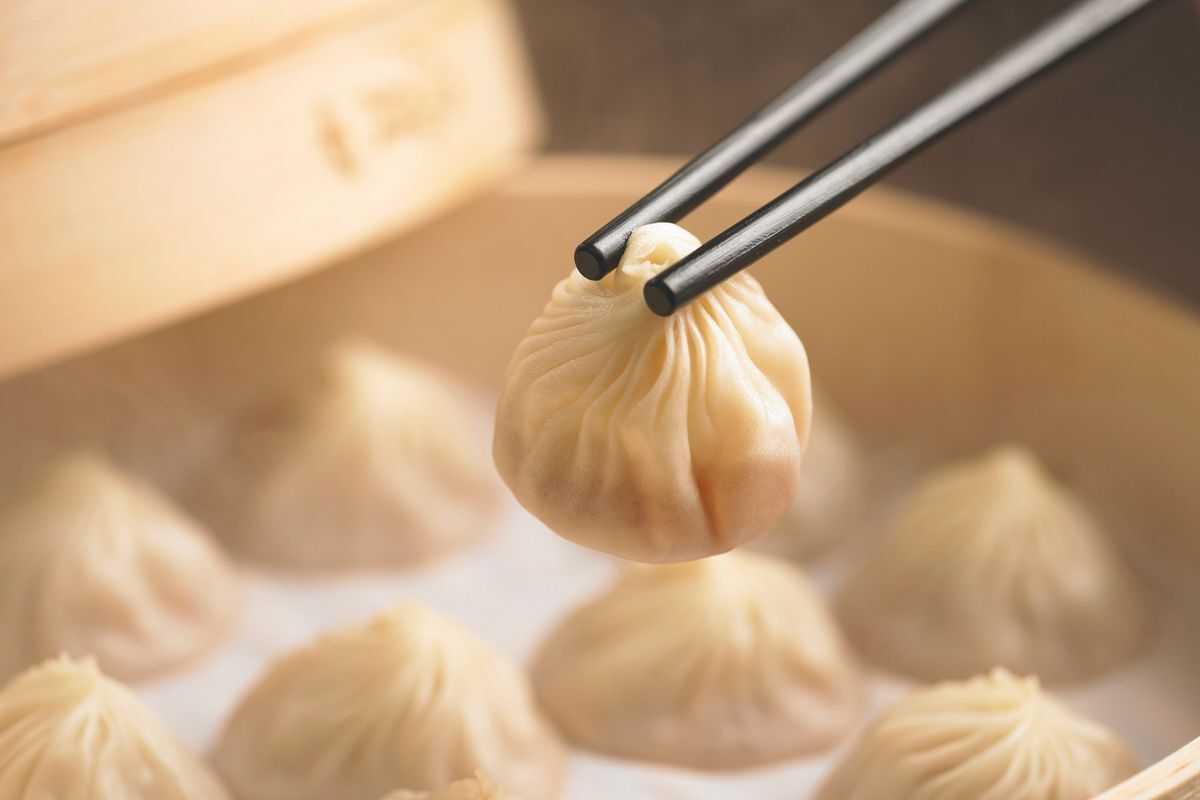 Best for: Feeding a dumpling addiction

Head chef: Refreshingly, there’s not a celebrity chef in sight. The dumplings are cooked by ‘technicians’ wearing lab coats and hygiene masks.

On the menu: Din Tai Fung’s scientific, Heston Blumenthal-style approach to dumplings and its authentic lo-fi decal is what made it a sleeper hit with celebs in the States. The Xiao Long Bao is to die for, best in the world, and you can even order chocolate ones for dessert. Plus, if your high maintenance companion ‘doesn’t like dumplings’ (sigh) there are plenty of meat and noodle-based alternatives.

Ambience: Din Tai Fung is a highly unusual fashionable restaurant. It’s part of a chain of over 150 and has – you might want to sit down – no Michelin stars (well, the Hong Kong branch was grudgingly awarded one in 2010). The glasses are from Ikea and it takes a regenerated London-style approach to comfort and reservations – yes, you’ll be queuing like you do for Barrafina. Except for longer. The good news is that a new branch is opening at Centre Point in 2019 to take the heat off. 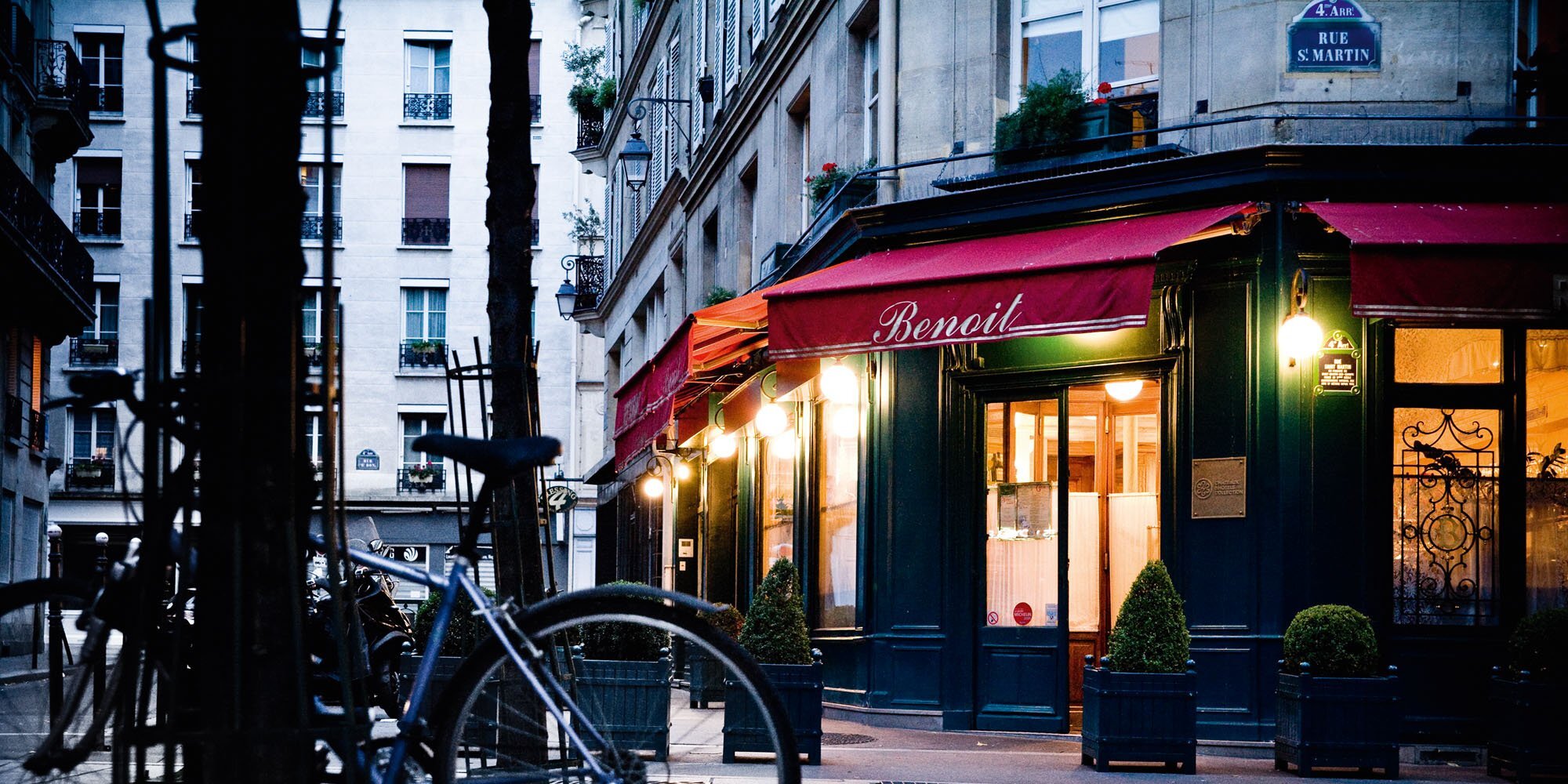 Head chef: Fabienne Eymard has been at the helm since 2015 and she runs a tight ship with Bruno Jousseaume overseeing proceedings in the dining room as the maitre d’hote ,and Guillaume as the maître d’hôte and Guillaume as head waiter. Benoit does Alain Ducasse proud as the bearer of a Michelin-star - a first for a Parisian bistro, while the wine cellar boasts some 512 labels selected by head sommelier, Elisa Combrouze.

On the menu: Expect top-class Parisian classics done to perfection, for example: snails in garlic butter, slices of beef cheek so tender they melt on your fork, duck foie gras, black pudding in creamy apple sauce, and profiteroles filled with whipped cream and chocolate sauce. No modern interpretations, deviation or intimidating details. Your food will often be served tableside from piping hot tureens. Portions are extremely generous and flavours are intense. Skip breakfast before going. No minimalist fare here.

Ambience: This is the epitome of the golden age of Parisian dining. Though the outside of the restaurant is fairly unremarkable, it’s just moments from the Hôtel de Ville, on the edges of the Marais. But it’s inside that the magic starts, with the shiny brass fittings, polished wood, red velvet banquettes, and the sky-blue trompe-l’oeil scattered with fluffy white clouds. This century-old bistro is a Parisian institution. 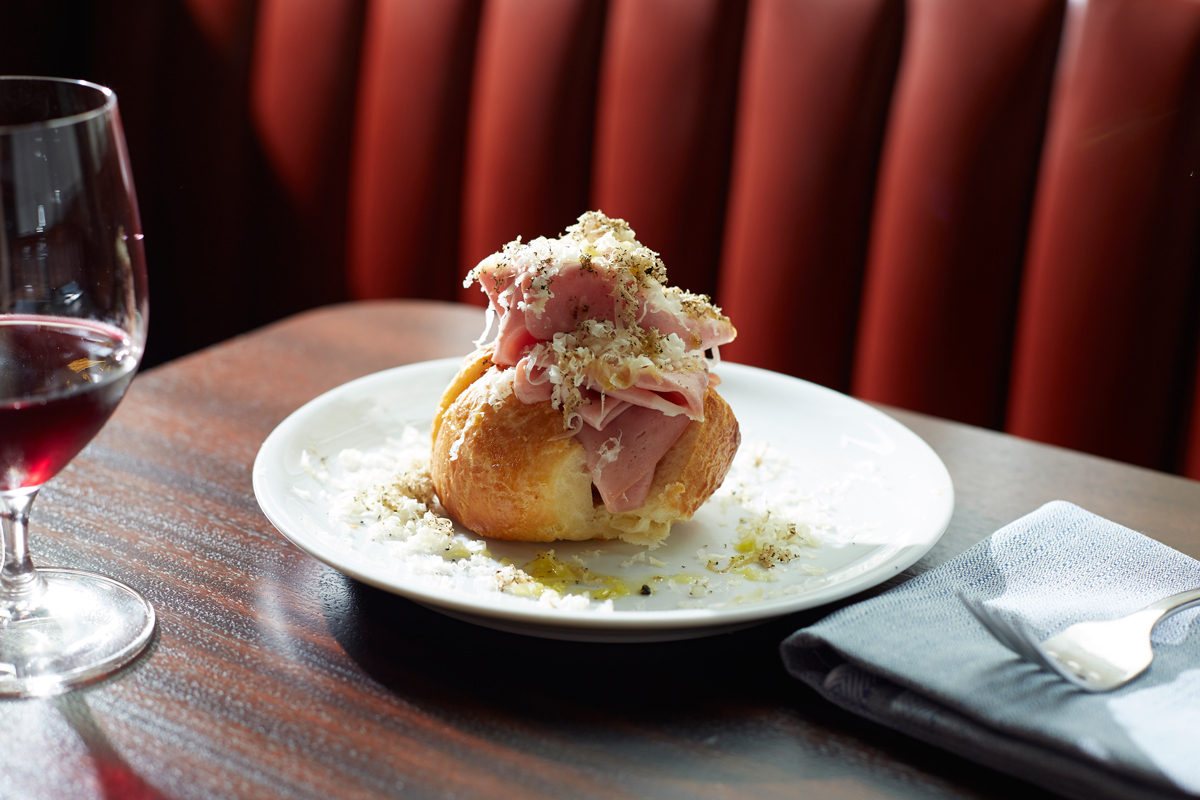 Head chef: There’s two. Riad Nasr and Lee Hanson first worked together at seminal Balthazar, so it’s safe to say they know their onions when it comes to delighting hard-to-please New Yorkers with their French fare.

On the menu: Next-gen French food has been bubbling under as a mega-trend for a while, and Frenchette, in downtown TriBeCa, is the place that’s put it over. The Gallic passion for theatrical dishes is given a nod with a duck frites where the canard itself is hidden under a pile of fries, and look out for St Tropez staple Tarte Tropezienne. Prompting a ‘mon dieu’ from francophiles is the wine list featuring only ‘natural wines’, but we think it makes a compelling, contemporary compliment to the traditional bistro food.

Ambience: Magnifique. The space is the former site of another French restaurant, Le Cercle Rouge, so it’s certainly authentic. The New York social dining scene used to revolve around bistros with a topical twist, and Frenchette benefits from the ‘bring back the old guard’ ethic also mined by Soho House’s revived Greek Street HQ in London. The décor is an old-world Parisian-blend of modernism and art deco, from the richly polished woodwork to the vintage lights. Drink or dine at the long bar, or tuck into a booth at one of the two dining areas. Getting a reservation can be tricky, so book in advance. 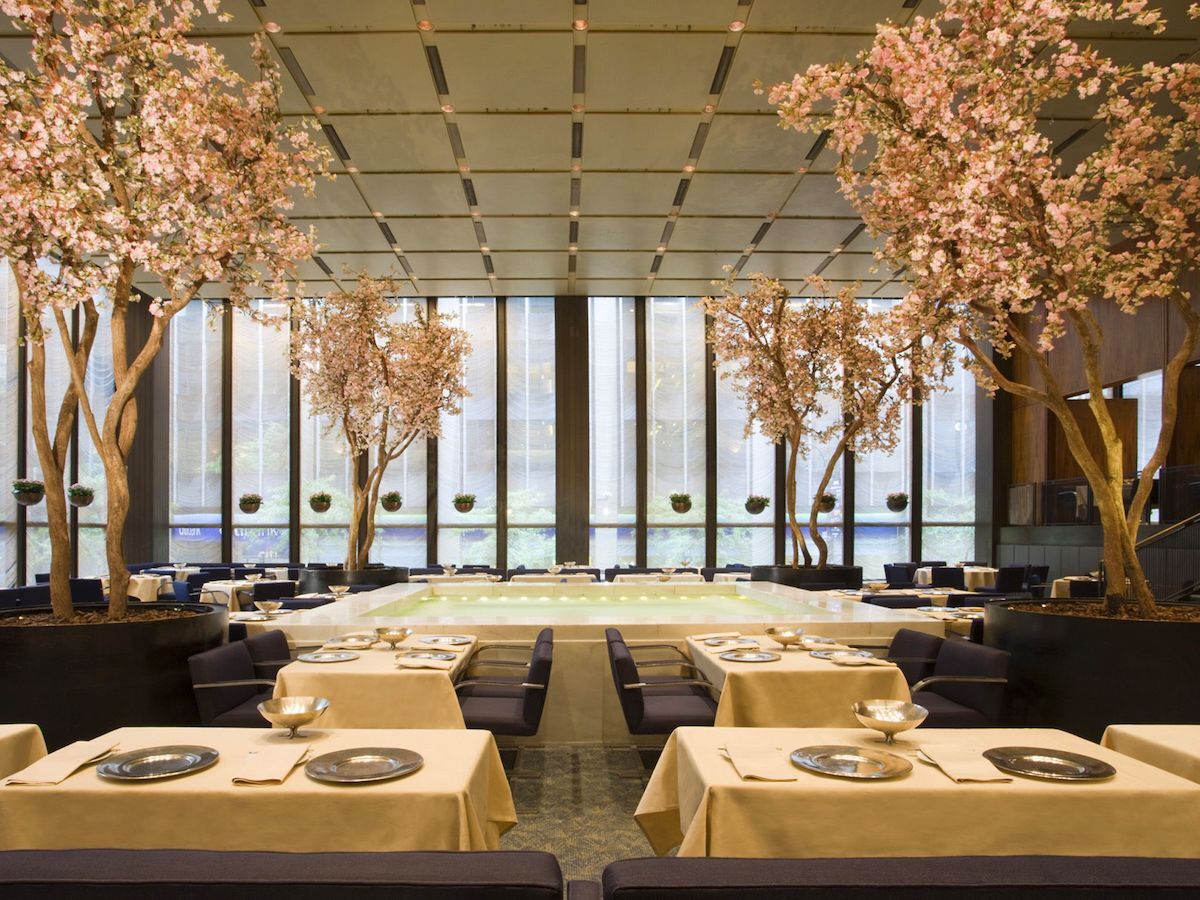 Head chef: This landmark New York restaurant paved the way for a new era of elegant, seasonal fine-dining when it opened in 1959. Recently reopened at a new Park Avenue address, the legacy continues, following a $30-million-dollar renovation under rising executive chef Diego Garcia – who earned a Michelin star as sous-chef at Manhattan’s Contra – and Bill Yosses, a former White House pastry chef during the Obama years who believes “a party without cake is just a meeting’.

On the menu: A fresh take on signature American classics includes New England clam chowder, bison fillet, and hazelnut financier. Chef Garcia’s early life by the Sea of Cortez in Mexico and later in Napa, California, informs his thoughtful approach to sustainable, sometimes forgotten seafood such as the lionfish, which he serves up with singular sauces and garnishes.

Ambience: The Four Seasons has long been the home of the ‘power lunch’ - Martha Stewart and Henry Kissinger have been regular patrons. As for the interiors, modernism meets comfort and sensual materials and detailing. The features are striking and include a sunken glass and gold leaf bar, hand-painted beaded window treatments sourced from a Czech village, Italian limestone, Edward Wormley-designed furniture and a stunning light sculpture. The place certainly doesn’t disappoint, although the millennial-minded have heartily LOL’d at touches like the wine list coming on an iPad. 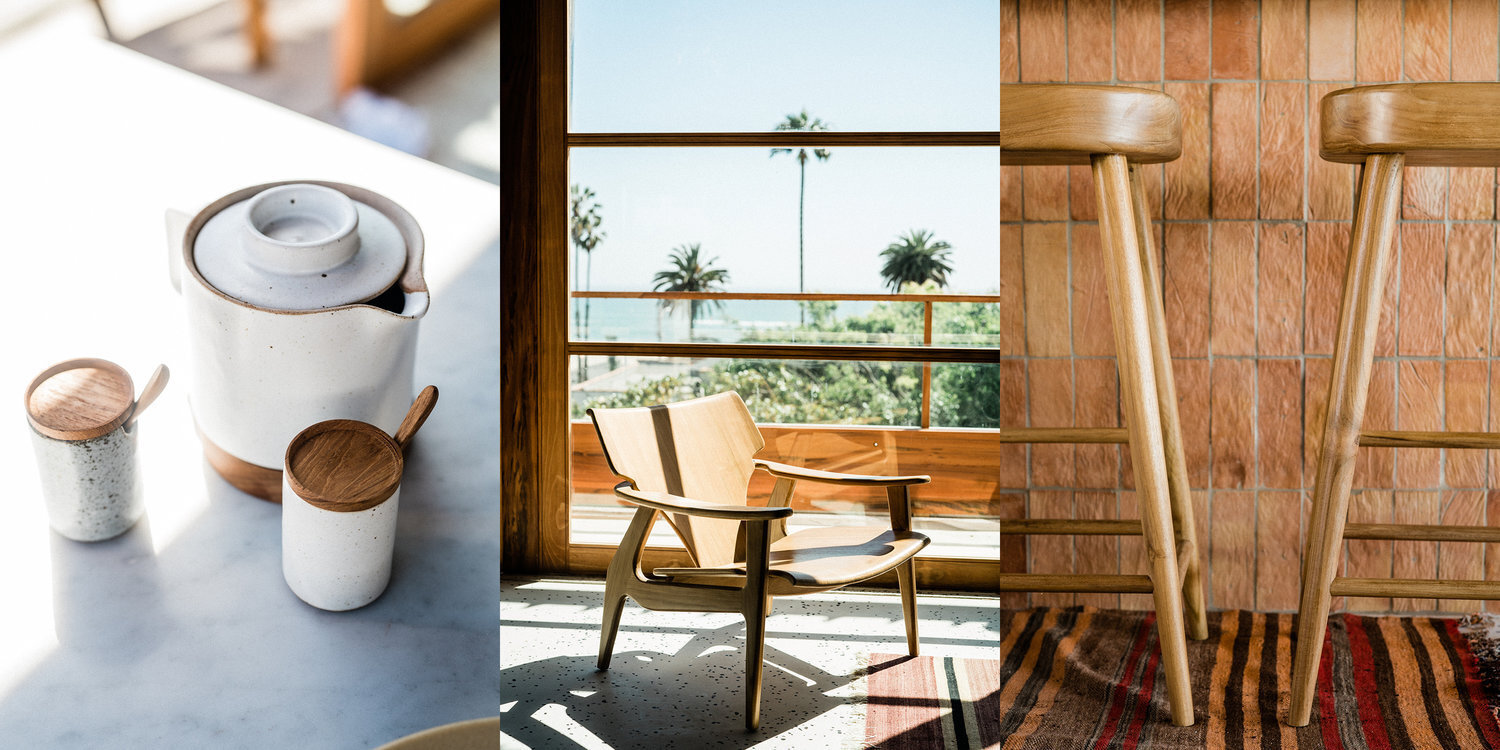 Best for: Mediterranean influences and Instagramming

Head chef: Thomas Linn is an assuredly laid-back Aussie with an intelligent take on place making; he designs his restaurants around the customer base. Inspired by its location overlooking the Pacific, the restaurant interior draws on natural wood, stone, copper accents and design pieces from North Africa and Southern Italy.

On the menu: Just like the space, the menu is informal with plenty of small dishes and appetisers to share. Inspired by Southern Italian specialities, Linn’s homemade lobster spaghetti is a stand-out, though the Grilled chick with Calabrian chili sauce and Veal Milanese is in close competition. For simpler offerings, there are wood fired choices and a salad menu that includes delightful combinations, such as watermelon and radish salad.

Ambience: A great spot for Santa Monica’s beautiful people. The casual, yet tasteful interiors and ocean views make it something of an oasis in which to while away the hours over a long lunch, or perhaps a sunset cocktail. 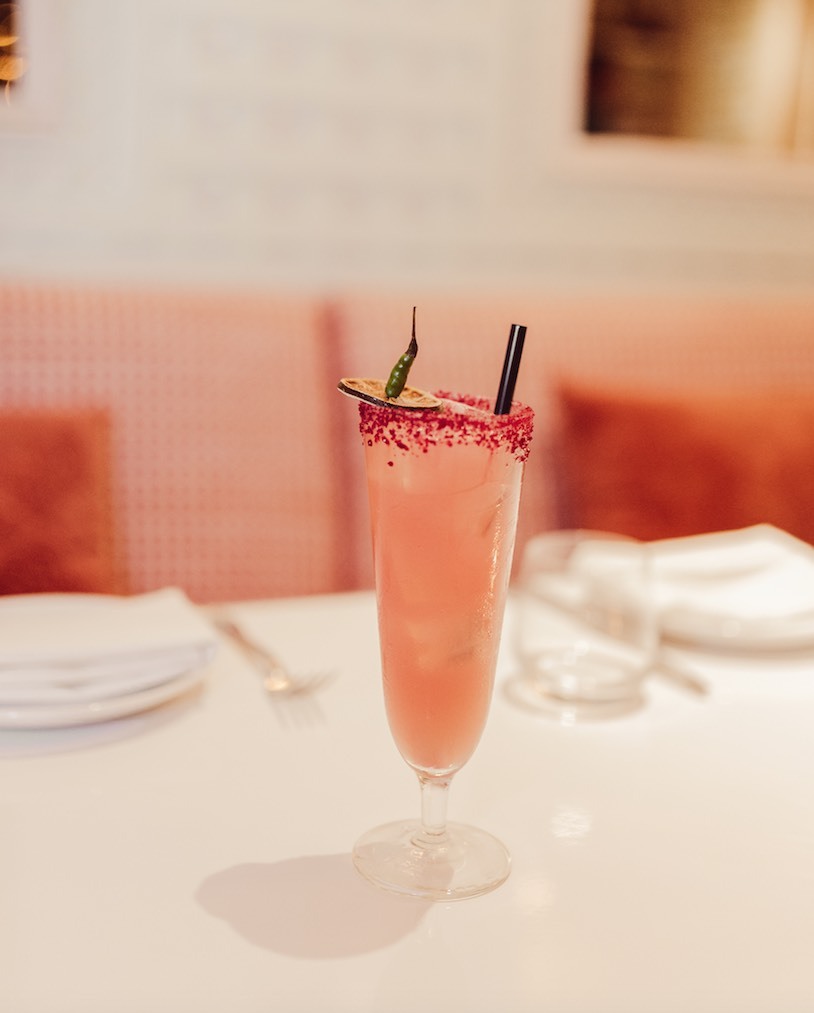 Best for: Vegans and celebrity-spotting

Head chef: Jean Imbert, officially Europe’s top chef is also one of the world’s most intriguing. Something of a celeb magnet in his native Paris, where his first restaurant Mahogany was the toast of the town, he’s an ami of acclaimed street artists JR and Nourry Plum, and in his spare time does a bit of animation. He also openly supports vegan cuisine, which in France could get you the guillotine.

On the menu: The menu is inspired by world flavours and the dishes that Imbert grew up with. The ‘stand up’ Caesar salad topped with rosemary breadcrumbs, or the burrata with figs are fresh and light, but if you’re looking for something a little richer, try the spaghetti tossed with caviar. Or, pull up a seat at the cocktail bar to admire the décor and spot a famous face or two, while sipping on signature drinks like ‘The Fresh’, infused with Grey Goose vodka, cucumber, lychee and grape.

Ambience: Hip-hop star Pharrell Williams –for whom Imbert also cooked over the years - and Miami music and hospitality bigwig David Grutman are behind this new restaurant that counts Lenny Kravitz and DJ Khaled as regulars, along with many an A-list celebrity. Designed by Ken Fulk, the new two-storey restaurant in Miami’s design district is adorned in soft candy hues and tropical palette, reminiscent of the city in the 1920’s.


For access and possible benefits at these and any other restaurants around the world, please contact your lifestyle manager.